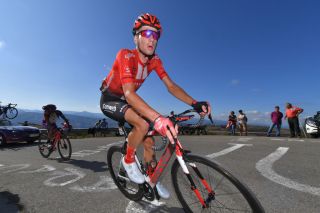 Team Sunweb's Martijn Tusveld has been forced to rest, just a day-and-a-half into his season, after a crash on stage 2 of last week's Tour de la Provence left him with concussion and a fractured shoulder.

The 26-year-old Dutch rider had to abandon the race – his first of the season – on the road between Aubagne and La Ciotat, with the day's stage being won by Russian road race champion Aleksandr Vlasov (Astana).

Subsequent X-rays have revealed that Tusveld has fractured his shoulder and is suffering from concussion, which will keep him away from racing for the coming month at least, his team reports.

"I'm really disappointed to have crashed out like that, especially after just getting back on track and having had a good off-season," said Tusveld in a Sunweb press release. "Hopefully, the recovery will go quickly and well, and I can be back in action soon enough, but until then I’ll focus on taking it easy with plenty of rest."

Storer and Tusveld extend with Sunweb

Last season, Tusveld crashed on the opening stage of Paris-Nice, resulting in a broken jaw, which kept him out of action until the Critérium du Dauphiné in June. Although he is unlikely to have to spend as much time away from racing on this occasion, Sunweb team doctor Camiel Aldershof has ruled out rushing back.

Pro riders frequently ride on their home trainers without using their arms when recovering from shoulder or collar bone injuries, but Aldershof warned that, due to the concussion, Tusveld would have to ensure that he rested sufficiently before trying to ride again at all.

"The fracture looks currently to be in a good position, and we'll continue to monitor that in the upcoming weeks to ensure the situation remains the same," said Aldershof. "But his concussion also means that, for the meantime, Martijn will need to take complete rest. We will assess his return to the rollers and racing in due course."