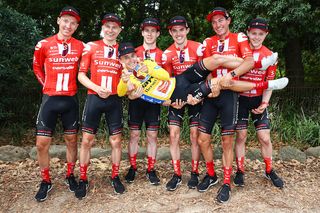 "There were some ups and downs during our time at the Tour Down Under and at the Cadel Evans Great Ocean Road Race," Team Sunweb sports director Luke Roberts admits to Cyclingnews as his young team warms up on the central Melbourne course ahead of the final stage of the 2020 Herald Sun Tour Under.

"We had some good talks about it, and tried to make the most of it – and to look for ways to keep moving forward, which was the reason we added this race to our programme. We wanted to try to continue with this group being together, and to try to take some more steps, and it's been really great to see this week how the riders have put everything we've worked on in the last couple of weeks into practice."

The team dominated a race that was far from easy, both in terms of the course and the competition – the latter made up of a Mitchelton-Scott team led by 2018 Vuelta a España winner and race favourite Simon Yates, plus two more strong WorldTour teams in EF Pro Cycling and Israel Start-Up Nation, as well as a host of domestic Australian teams containing a combination of young, hungry athletes and experienced old hands.

Sunweb nevertheless took the race by the scruff of the neck as early as the opening stage, giving their new, 21-year-old Italian sprinter Alberto Dainese an armchair ride to the line and victory in the Victorian town of Shepparton, and then setting up Hindley for the win the next day on the final climb up to the Falls Creek ski resort.

The rider who was arguably their biggest rival, Yates, cracked under the pressure that was applied at the front by Sunweb's Michael Storer and Rob Power, and lost six minutes, while Hindley took over the race lead from teammate Dainese – and never let go.

Just a week-and-a-half previously, Power had been looking likely to take a podium place at the Tour Down Under in Adelaide, having climbed to third place overall at the finish of stage 3 of the race in Paracombe. But the 24-year-old faded to 27th overall on the final stage to Willunga Hill, where Hindley was forced into taking the initiative and finished a lowly 27th on the same stage, and became Sunweb's highest-placed finisher in 18th place overall.

Less than a week after that, at the Cadel Evans Great Ocean Road Race warm-up event, the Race Torquay, near Geelong, Dainese finished third behind winner Sam Bennett (Deceuninck-QuickStep) and NTT's Giacomo Nizzolo. But in the race proper, three days later, it was again left to Hindley to shoulder the responsibility, coming away with the team's best place of 34th – and it was then that Luke Roberts and the management team began to make plans for how things could be improved for Australia's oldest stage race, the Herald Sun Tour.

"This week, we've tried to push Jai to step up as a leader, and to take that leadership role and direct his teammates during the race, and he's definitely taken some steps forward in that area, which was great to see," explains Roberts. "We knew that they'd have a difficult time at the Tour Down Under and the Cadel race, as we've had a really young team here this summer, which is still developing, despite their talent.

"We had some quite long meetings and discussions about how we were working together as a team," he continues, "and how they've responded is impressive – especially the ride they did yesterday [stage 4 to Mount Buller]. They took the race from the front, all the way through to a kilometre to go, and so I'm really happy that this young group has made so much progress, so credit to them for the results they've picked up this week."

Now such experience needs to be translated into performing in Europe, and facing their first season without the face that is – was – Tom Dumoulin, who joined Sunweb in their guise as Argos-Shimano in 2012, and in later years delivered the overall title at the 2017 Giro d'Italia, followed by runner's-up spots at both the following year's Giro and the Tour de France.

Dumoulin's moved on to pastures new at Jumbo-Visma for 2020, leaving a sizable hole at Sunweb, and although Cyclingnews suggests that one rider doesn't make a team, Roberts agrees that, like countless teams that lose their 'star player' in numerous sports before them, Sunweb find themselves in a rebuilding phase.

Nicholas Roche – 1987 Tour de France winner Stephen Roche's son – is now, at 35, the oldest rider on the team by some way, which will seem almost absurd to long-time readers of Cyclingnews. In fact, he's one of only two riders on the roster in their 30s – the other being 31-year-old Chad Haga, while Michael Matthews will only turn 30 at the end of the season.

The Luke Roberts-led, Australia-summer squad, then, is a microcosm of the wider team – a youthful outfit packed with talented 20-somethings, and one teenager in Belgian Ilan Van Wilder. And there are plenty of riders there who have made their breakthroughs already, like 2017 Cadel Evans Great Ocean Road Race winner Nikias Arndt and 2018 Strade Bianche champion Tiesj Benoot, while Wilco Kelderman shoulders their Grand Tour hopes having finished in the top 10 overall at the last three editions of the Vuelta a España.

"For the one-week stage races, we have quite a talent pool," Roberts says. "We have Chris Hamilton, Marc Hirschi, Thymen Arensman, and Sam Oomen coming back [from a fractured pelvis sustained in a crash at last year's Giro d'Italia]. So there's quite a lot of depth there in developing talent, and I think we'll see a lot of good results in the one-week stage races this season.

"I think eventually some of those guys will progress on to be three-week riders. Perhaps not this year for the three-week races, but I expect that some of these young guys will be competitive in all the one-week races already this season. Another season or two and some of them will be competitive and step up in the Grand Tours. It's definitely a good talent pool and we have a good future to look forward to."

Hindley: I was nervous but had every faith in my guys

Just a few hours later, with the Herald Sun Tour done and dusted for another year, a delighted Jai Hindley steps down from the podium, glowing with the relief that comes with having secured an overall title, with all pre-stage nerves banished in time for a celebration.

"I was very nervous," the 23-year-old Australian admits. "But I had every faith in my guys, and they were awesome all day, and controlled the race – as they have all week. They've just been phenomenal, so I can't thank the team enough.

"It's been a pretty big Aussie summer of racing, with a few ups and downs," continues Hindley, employing the same phrase used by his sports director Roberts earlier to diplomatically describe the team's inability to have delivered prior to this week.

Now that period can be put behind them as, buoyed by three stage victories from a possible five, plus the yellow leader's jersey and the black-and-orange-polka-dot jersey – the latter also won by Hindley as best climber – the team leaves Australia to put what they've learned so far this year into practice elsewhere.

"I'm so happy to finish it off this way and get the ball rolling before I head back over to Europe," Hindley says. "We had a super-young team over here, and at the Tour Down Under we made a few errors, but we had some good rides as well, and this week we've been able to piece the puzzle together, so it was unreal."

Hindley will now return to Europe for the season, but will soon be on the road again, hoping to switch roles once more and be of assistance to his team.

"I'll be heading to the Middle East at the end of the month for the UAE Tour, where we should be riding for Wilco Kelderman," says Hindley. "I'm looking forward to helping him out as best as I can, and hopefully the form's still good and I can do a good job."

Not that he's about to completely forget the leadership skills he's developed this week; further opportunities should come knocking for Hindley.

"Yeah – I think so. I'll probably get my chance at a few of the smaller WorldTour races and HC races, but I'm really looking forward to it. The team has a lot of faith in me, and, coming over here for the Tour Down Under, they did have expectations of me, and wanted me to perform, and it didn't quite work out.

"Coming into a race as the designated leader is a lot of added pressure," he says, "but it's also a really nice opportunity for a young guy like me to come into a races like these and be the leader, and just proves the faith the team has in me."

Humble in victory though he might be, Hindley might just have to start getting used to it.