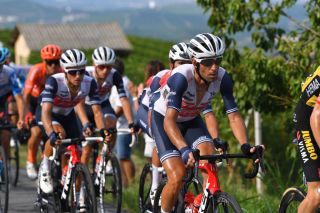 Trek-Segafredo tried to focus on the positive aspects of their performance at Il Lombardia, where their fourth, fifth and sixth places behind winner Jakob Fuglsang (Astana) suggested they were strong as a team but not strong enough to place one of their three leaders in the attack on the Civiglio that decided the Italian monument.

2019 winner Bauke Mollema finished fourth, 1:19 behind Fuglsang, Giulio Ciccone was fifth at 1:40 and Vincenzo Nibali was fifth at 3:30.

They survived the key selection over the Muro di Sormano and packed the seven-rider group that got away, but then they lacked the individual and combined strength to stay in contention. When Fuglsang and Bennett attacked near the summit of the Civiglio and Vlasov cruised across to them, Mollema and Ciccone could not respond.

Trek-Segafredo's collective weakness has been visible since the return to racing. They rode an aggressive Milan-San Remo but came up empty handed when Nibali was unable to go with Julian Alaphilippe's attack on the Poggio.

Nibali started Il Lombardia wearing race number 7, a clear indication that he was not team leader and he had kept a low profile all week. He won Il Lombardia in 2015 and 2017 but with the October Giro d'Italia his main goal of 2020, he is still significantly far from his best.

Nibali attacked on the descent of the Muro di Sormano but was then hit by cramps and was first to be distanced on the Civiglio.

"I rode the last 50km with cramps. Bauke (Mollema) and Giulio (Ciccone) were better and I put myself at their disposal," Nibali admitted.

"It was a complicated and conditioned finale, I couldn't push as I wanted. On the Civiglio climb I tried to keep a regular pace, both for me and my teammates but when the race exploded it was difficult to do more and we saw the difference."

Nibali tried to stay upbeat after his suffering. He will ride the tough Giro dell'Emilia near Bologna on Wednesday and then the Italian national championships. While most of the big-name riders focus on the Tour de France in September, Nibali will head to altitude and ride Tirreno-Adriatico (September 7-13) before the Giro d'Italia starts in Sicily on October 3.

"I think the result is decent enough. We always race to win but we have to be realistic and accept it. There are riders more brilliant than us in these first races and at the moment. We can be satisfied because overall the performance is improving race by race, we have shown solidity and teamwork, but we lack days of racing in the legs and stage races that allow you to make a quantum leap in terms of sharpness."

Ciccone will shadow Nibali and also ride the Giro d'Italia, while Mollema will lead Trek-Segafredo and the Tour de France with Richie Porte.

Mollema attacked alone on the Civiglio to win the 2019 Il Lombardia but lacked the same form this year. He combined with Ciccone to chase Fuglsang, Vlasov and Bennett. They closed to just ten seconds at one point but then Mollema lost time on some technical corners and then suffered a gear problem.

"I am a little bit disappointed to just miss the podium, but there were just three guys stronger," he admitted.

"Unfortunately the other three were a little bit stronger today but I think we are in a good way for the Grand Tours that are coming. And I think this is also good motivation for the rest of the team.

"I felt pretty good, only the heat in the finale was a little bit too much for me, and I guess hard for everyone since the differences were pretty big in the top 10. As a team, I think we rode strong, finishing fourth, fifth, and sixth."