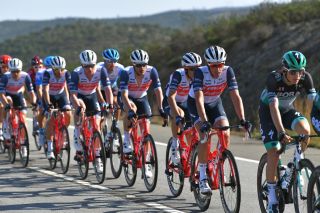 Trek-Segafredo teammates Jasper Stuyven, Koen de Kort and Edward Theuns crashed together through a corner that had an unexpected patch of deep gravel during stage 3 at the Volta ao Algarve.

Trek-Segafredo confirmed that all three riders suffered contusions and abrasions but that they should be able to continue racing, and line up for the start of stage 4 on Saturday.

"Early report on the conditions on our riders who crashed: @Jasperstuyven, @koendekort and @EdwardTheuns, and all suffered contusions and abrasions and should be able to continue in the race. More evaluation may be required, and we will post any updates if needed," Trek-Segafredo posted on Twitter.

The crash happened inside the final 25km at a 90-degree left-hand turn through a roundabout and a central reservation. The incident left all three Trek-Segafredo riders on the ground. Stuyven appeared to have suffered the worst of the fall, but several minutes passed before any of them were able to get back on their bikes.

Once back up and riding, the three riders rolled to the finish and weren't able to play any part in the final. They finished as the last three riders of the day more than 12 minutes down.

However, their teammate Ryan Mullen, who is normally part of the lead-out, finished sixth place behind stage winner Cees Bol (Sunweb) in Tavira.

In an post-race interview, Mullen commented on the crash, saying he saw his teammates Stuyven, De Kort and Thuens crash through a patch of gravel inside 20km to the finish but that he managed to avoid crashing.

"Somehow I had space to turn right and keep it upright," Mullen said. "We had a plan for the final; together with me and Jasper, we were going to try something, but obviously they didn't come back after the crash.

"I was alone and feeling quite good, and thought that I may as well give it a try. I had good positioning and I followed the right teams. Inside the final K, you can't move much more, so I had a good position coming into the final corner. I'm not really a pure sprinter so I just hung on where I was, and tried to pass as many guys as I could before the line and ended up sixth.

"It's a shame [they] crashed and hopefully it doesn't hamper their preparations for the Classics because they are going very well."

In a post on Twitter, Israel Start-up Nation's Dan Martin expressed his concern about the patches of deep gravel on the course, saying he had informed UCI officials ahead of the race.

"Talked to the @UCI_cycling commissaries at the start today about the numerous patches of deep gravel on the course. "Oh really? We haven't seen any" Guess they didn't see the gravel that caused the Trek guys and @Guillaumeboivin to crash. Hope all are ok."