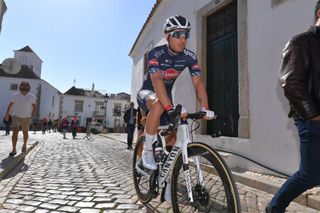 Friday's stage 3 of the Volta ao Algarve saw Sacha Modolo (Alpecin-Fenix) sprint to third place in Tavira, a minor result in the grand scheme of things, but for the Italian, an encouraging one after two tough years.

A new signing to the Belgian squad for 2020, Modolo spent 2018 and 2019 at EF Pro Cycling, and for much of those years he struggled with an undiagnosed illness which held him back. Having last won a race in February 2018, Modolo explained to Cyclingnews last September that he had been battling an intestinal fungus all along and was only diagnosed after last year's Giro d'Italia.

An upturn in results followed, with podium spots on stages at La Route d'Occitanie and Adriatica Ionica Race coming later in the year, but Modolo's doctor said it would take six months to return to his best. The podium spot in Tavira, against a high quality field, showed that he might just get there.

"For me the past two years have been very difficult," Modolo told Cyclingnews after the finish. "I had thought at times to stop cycling altogether. I only signed the contract with the team on November 19.

"When Alpecin-Fenix called me, I signed immediately because to have a teammate like Mathieu van der Poel is wonderful. So, I did that and said I want to return to my best, so I'll hope for that.

"It's an easy-going team. It's a good atmosphere, we're professional, and there's no big pressure on the riders. I love this team."

Modolo's second place on the gradual uphill finish came behind Team Sunweb's Cees Bol, with the Dutchman leading from the front in the final drag to the line.

With Alexander Kristoff (UAE Team Emirates) and eventual third-place finisher Fabio Jakobsen (Deceuninck-QuickStep) following Bol, it took some going to overhaul them and close in on the winner. Modolo almost got there, too.

"It's my favourite type of sprint, with a little bit of climb to the line," he said. "I tried to take the wheel of Jakobsen and then when I tried to sprint past, I saw that the rider from Sunweb had a two-metre gap.

"I tried and tried, and I think that with another 50 metres I could've won, but the line is where it is, so I'm happy. I'm happy to return to fight and win after two very difficult years."

Modolo enjoyed the services of one of the sport's biggest names, Mathieu van der Poel, on the run-in to the line. With the Dutchman using the race primarily as preparation for the spring Classics, he has been happy to do turns for his teammates in Algarve.

"I have van der Poel leading out, so it's strange, no?" the Italian laughed. "The team went very hard and I tried to win for them, but we'll try for another day.

"Next up is Kuurne and we'll try again. I hope to try and fight for the win," said Modolo, who finished sixth at the Tour of Flanders three years ago. "Then we'll go to training camp because we're not at Tirreno-Adriatico or Paris-Nice. My programme will be Ronde van Drenthe, Milan-San Remo (where he was fourth ten years ago) and all the Classics."

Considering Modolo's track record, which includes five WorldTour wins – two Giro d'Italia sprints among them – we could well be hearing a lot more about the man who felt a forgotten rider at the end of 2019.