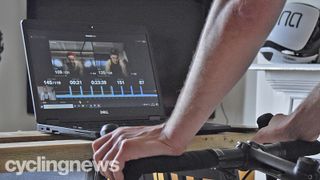 TrainerRoad has launched a brand new feature in response to the current self-isolation behaviours of its users. Group Workouts is a new way to motivate yourself through your next session.

With the coronavirus pandemic forcing riders to forego the group ride, many are being forced to go it alone on the turbo trainer. TrainerRoad CEO Nate Pearson told Cyclingnews that as a result, the company had seen a 50 per cent growth in daily activities versus this time last year.

The Group Workouts feature, initially earmarked for launch in the latter half of 2020, has been brought forward in response to the current climate. In just 10 days, developers have turned a proof-of-concept into reality, effectively bringing the group ride back to its subscribers.

Put simply, TrainerRoad’s Group Workout feature is a synchronised workout with friends whereby up to five participants can endure the same workout concurrently, while a group video chat enables conversation and group motivation.

During the effort, each participant’s power and heart rate data is displayed, meaning during maximum effort intervals, real-time comparison can be made in a bid to out-perform each other's power numbers.

During all intervals, each rider is given their own target power in respect of their personal threshold. This ensures each rider suffers equally during longer, more steady-state intervals, and everyone gets the maximum benefit out of the workout, rather than stronger riders being underworked and weaker riders being pushed too hard.

TrainerRoad is also working on increasing the number of concurrent athletes in a group workout from five to 12, which is expected to be made official soon.

Not dissimilar to logging into a Zoom meeting or Google Hangout, the workout ‘host’ will share a code with their group ride mates. A webcam is required to capture your pain face, while headphones are required to output your ride-mates’ motivational musings directly into your ears.

TrainerRoad has typically employed an ‘entertain yourself’ philosophy, whereby unlike Zwift, the app can be run in the background while you get lost in a Netflix series or relive your childhood on Disney+.

This has typically been beneficial for longer, lower-effort workouts, but for sprint intervals, maximum concentration needs to be directed at the workout in hand. Group Workouts aims to bring the mental stimulation of conversation to aid you through such workouts. It’s then up to you and your friends to squeeze out those extra few watts.