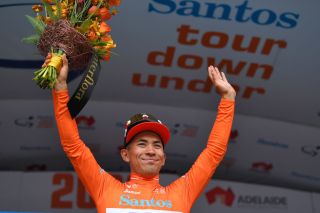 Caleb Ewan (Lotto Soudal) takes the ochre jersey as the new leader of the 2020 Tour Down Under after winning stage 2 to Stirling (Image credit: Getty Images)

Caleb Ewan (Lotto Soudal) avoided a major crash on the run-in to Stirling and confidently survived the rolling finale to win stage 2 and taking the overall lead in the 2020 Tour Down Under.

He is now on equal time with the winner of the opening stage of the race on Tuesday, Sam Bennett (Deceuninck-QuickStep) but pulled-on the Ochre-coloured leader's jersey thanks to 'countback': Ewan's seventh place on stage 1 trumping Bennett's 10th place on stage 2.

"We always know that coming here to Stirling's going to be a pretty tough day," Ewan told reporters at the finish, having received his leader's jersey on the podium,

"It's one of those days that can go either way; it can be a sprinter like me getting to the finish and winning, or it can be guys like Daryl Impey. It ended up being a pretty mixed podium, with Daryl second and Nathan Haas third.

"Those guys are a real puncheurs, whereas I'm more of a pure sprinter. It's one of those exciting kinds of stages, and it's really hard to pick it before the start," said Ewan, who also took the win the last time the race finished in Stirling, in 2018, ahead of then teammate Impey and Bora-Hansgrohe's Jay McCarthy.

A crash with 1.5km to go brought down a number of riders – among them Haas' Cofidis teammate Elia Viviani and Impey's Mitchelton-Scott teammate Simon Yates, while Richie Porte was held up by it and given the same time.

It remains to be seen whether Viviani and Yates will be able to start stage 3 on Thursday as a result of their injuries.

"I was ahead of the crashes, but I could hear them," Ewan said. "It's never a nice sound to hear crunching carbon, but luckily I was in front of it all.

"I think everyone's quite nervous because it's one of those finishes where a lot of guys sit up, and so there are always gaps opening up in the bunch," he continued.

"Obviously the GC guys don't want to be caught behind any of those gaps, and all the sprinters and puncheurs are going for the stage, trying to be at the front as well. It basically means that every team wants to be at the front, but it was actually quite easy today compared to normal. Usually it's a bit harder around here, so I think the whole bunch got really nervous on that last part."

'We've always seemed to bounce back'

Recalling the last few kilometres of the race, Ewan praised his former Mitchelton-Scott team for their work in trying to set up defending Tour Down Under champion Impey, but was full of praise for his own Lotto Soudal teammates, who had clearly put the disappointment of Ewan's seventh place on the opening stage on Tuesday behind them.

"Mitchelton did a good job," said Ewan. "They came up quite late, but they were there with the whole team. But my team was always there, just keeping me out of trouble and keeping me in position on that last, long climb.

"That's basically what I need: I need the easiest ride possible, and they gave me that, and delivered me right near the front of the bunch in those last two kilometres after the roundabout, and from there I could kind of find the wheels by myself and set myself up for a good sprint."

"We just had to deal with yesterday," he continued, explaining how the team learnt lessons from losing the stage 1 sprint to Bennett.

"It happens. There have been plenty of times when we've stuffed it up and we haven't got the result we've wanted, but we've always seemed to bounce back. We had a good debrief last night, talking about what we can improve, and the boys came out much better today and they delivered me really well."

With Ewan's wife and young daughter on hand in Stirling to help him celebrate his victory, the 25-year-old sprinter can enjoy the moment in the leader's jersey, knowing that he'll have to give it after the tough climb up to the finish in Paracombe on stage 3 on Thursday.

"It's always so nice to have them on a race with me, and actually my daughter's been to three races so far since she's been alive, and I've won all three, so I think I need to keep bringing her," laughed Ewan.

"She didn't come yesterday, and I lost, and she came today, and I won."

His daughter came to the second of his three Tour de France stage wins in Nîmes last year, when Ewan was making his debut in La Grande Boucle.

"The next one she came to was the Schwalbe Classic on Sunday, and this was the third one. Maybe I should bring her tomorrow," he smiled.