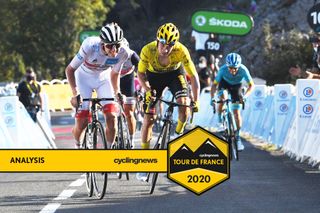 Tadej Pogačar and Primož Roglič ahead of the rest on the Grand Colombier (Image credit: Getty Images Sport)

After 15 days of racing, the 156 riders remaining in the Tour de France peloton will be grateful for the day off the second race day provides. They'll have to enjoy it while it lasts though, because on Tuesday the battle will be back on as the final week begins.

A brutal third week is on the menu, with four forays into the mountains including a summit finish at the Col de la Loze on Wednesday and a time trial finishing atop La Planche des Belles Filles on Saturday before Sunday's final sprint into Paris.

A battle for the green and polka dot jerseys is sure to play out, while yellow is still up for grabs, too, with two Slovenian stars head and shoulders above the rest. Battles will rage elsewhere, with the final podium spot – and who knows, maybe even more – within reach for half of the top 10.

Here, we take a look at how the GC men have fared so far, try and get a grasp on their trajectories, and look at what they can expect on the final six stages of tthe Tour de France.

The Slovenian is in the race leader's yellow jersey and very much in the driving seat heading into the final week. He's been taking time and time bonuses since stage 4 and has shown he's the equal of closest rival Tadej Pogačar over the last three days.

Sticking to Pogačar and avoiding collapse will be the least of his ambitions over the remaining six stages, while the stage 20 time trial offers the opportunity to take a second stage victory.

Pogačar has been thrilling in the mountains from the Pyrenees onwards, taking a chunk out of Roglič's lead in Loudenvielle and thereafter showing he's the only man capable of attacking the yellow jersey.

The 21-year-old took four bonus seconds away from his compatriot on the Grand Colombier, but he'll need to do the near-impossible and gap Roglič to win the Tour.

The veteran Colombian could well be heading to his second Tour de France podium spot through a combination of solid riding and avoiding the crosswind and crash troubles that have seen off others.

He may not have been as visible as some of the other men in the top 10, and the onus now is really on defending third rather than battling the two Slovenians. With a time trial to come, he's a good bet to see off a rear-guard action.

A Tour debutant, López has only improved as the race has gone on, with fourth on the Grand Colombier his best result yet. His form bodes well for Villar-de-Lans and the Col de la Loze, but will we see him go on the offensive?

The Planche des Belles Filles time trial will be intriguing for López watchers. We'll see if his fifth place in the time trial at the Volta ao Algarve was a one-off, or whether he can battle the likes of Urán and Richie Porte.

Yates, one of the 'here for stage wins' gang, finds himself in podium contention a week from Paris.

A spell in yellow and third place behind fellow stage win seeker Julian Alaphilippe in Nice have been highlights so far, though he's still clustered in the chasing pack behind Roglič and Pogačar right now.

Whether he can equal – or better – his fourth place in 2016 should depend on how his time trial holds up. He shed 40 seconds on the Puy Mary and 15 on the Grand Colombier, though, so maintaining his GC position might be the goal.

Porte is a rider in the ascendancy and looks truly capable of mounting a podium challenge in the final week.

He was best of the rest behind the Slovenians on both the Puy Mary and Grand Colombier, and now lies only 29 seconds away from Urán in third.

He took 35 seconds (plus four bonus seconds) out of the Colombian on those stages, so closing the gap further on the Col de la Loze looks eminently feasible. All points towards a TT showdown for third place.

Landa's first Grand Tour as a sole team leader looks to be going mostly to plan, even if he might like to be a little higher on GC right now.

His highlight so far has been stage 9 on the steep slopes of the Col de Marie Blanque, where he was among the four strongest men.

He's been solid since then, but will surely be eyeing the Col de la Loze, especially the steepest slopes at the top. There, he could do real damage to those ahead of him, and he'll need to, given the time trial that lies ahead.

On what has been a largely disappointing Tour for Movistar, Mas finds himself solidly in the top 10 and seemingly improving as the days pass. The team has been more or less anonymous over the last two weeks, but Mas was fifth on the Grand Colombier.

Shoots of optimism heading into the final week, then. A podium spot looks way out of reach, though, and a stage win is a long shot too – both for Mas and 40-year-old teammate Alejandro Valverde, who lies 12th.

After his early season showings, there was much hope for Quintana at the Tour, but bad luck before (he was hit by a car and injured his knee in late July) and during (knee and elbow injuries sustained in the crash on stage 13) the race have added up to a less-than-ideal outing so far.

His fourth place on Orcières-Merlettes boded well, but after the crash and his 3:50 time loss on Grand Colombier, Quintana's podium chances are certainly over.

Dumoulin lay fifth overall before torpedoing his own chances in aid of Roglič on stage 8 to Loudenvielle. Only hypotheticals can answer whether the Dutch team could've 'done a Sky/Ineos' and grabbed two podium spots in Paris, but it's out of the question now.

The main goal for Dumoulin is simply to support Roglič as best he can and secure that overall victory.

The Frenchman was a podium contender until his implosion on stage 13. A first Cofidis stage win since 2008 was the aim when he joined Cofidis for 2020 and surely will be in the final week.

The veteran's relatively quiet season has continued at the Tour, a pity for Movistar. A top 10 spot could be feasible, though his team at least has control of the team classification once again.

It's hard to say what the final week holds for Bernal. He hadn't impressed during the first two weeks but still, the Grand Colombier catastrophe was unexpected.

A stage win looks an optimistic aim, and you have to wonder whether he'll consider a Vuelta bid to salvage something from this autumn.