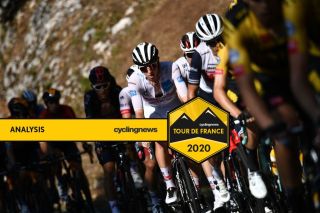 Can UAE Team Emirates’ Tadej Pogacar continue to take on the might of Jumbo-Visma and race leader Primoz Roglic going into the final week of the 2020 Tour de France? (Image credit: Getty Images Sport)

On the face of it, Jumbo-Visma's performance on stage 15 of the Tour de France on Sunday was a resounding success – and yet, you wouldn't be surprised if there was a certain degree of trepidation in the Dutch team's camp as the Tour pauses for its second rest day on Monday.

In the Pyrenees last weekend, Primoz Roglic's lieutenants flattered to deceive. The racing was far more open than they would have liked, with all the leaders isolated on both days, and Tom Dumoulin raised question marks when he took it upon himself to sacrifice his own position on GC.

Seven days on, and Jumbo-Visma's status as the strongest team in the race has well and truly been reinforced, not least due to the woes of Ineos Grenadiers, who saw hopes of an eighth Tour victory in nine years evaporate as Egan Bernal cracked on the final climb of the Grand Colombier.

All the pre-race talk centred on the Dutch team stepping up to rival the British team, but on Sunday they fully eclipsed them. After a chaotic start on the flat, Jumbo's Tony Martin took to the front to set the tempo en route to the three major climbs, and barely another team saw the front all day. UAE Team Emirates did a couple of kilometres on the first climb, and Mitchelton-Scott's Adam Yates produced a brief attack on the final climb, but otherwise it was yellow-and-black jerseys on the front of the main group all the way.

Robert Gesink worked on the Col de Biche and its descent, while Wout van Aert took over on the lower slopes of the Grand Colombier. We've already seen how well the Belgian can climb – as well as sprint – at this Tour, but his turn on the hors-catégorie climb was something else. Only 20 riders could follow his pace, and the likes of Bernal, Nairo Quintana (Arkéa-Samsic) and Guillaume Martin (Cofidis) were not among them. Van Aert pulled off with 8.8km to go and, in a cruel twist of the knife, rode in Bernal's wheel all the way to the top, adding to the psychological torment with every passing metre.

The only blip in the Jumbo-Visma lines was George Bennett, whose tempo wasn't enough to deter Yates from attacking, at which point Tom Dumoulin had to take the reins as the New Zealander fell away. Dumoulin, though, underlined his super-domestique status by bringing Yates to heel and then leading the 12-rider yellow jersey group all the way to the final 600 metres. It was some statement that Sepp Kuss wasn't even used, and that the American was able to place sixth on the stage, with Dumoulin making it three Jumbo riders in the top 12.

And yet, while pre-race favourite Bernal, along with the in-form Quintana, were both blown out of the running, Roglic actually saw his overall lead diminish. Granted, Tadej Pogacar's four-second gain was only due to bonus seconds, but the fellow Slovenian's stage win – his second of this year's Tour – strengthened suspicions that he's the strongest rider in the race. Indeed, if you discount the 1:21 Pogacar conceded in the crosswinds on stage 7, the 21-year-old would be in yellow, and by some 41 seconds.

Instead – and it should be pointed out that Pogacar may not have gone out and gained that time had he not lost it in the first place – Roglic leads his compatriot by 40 seconds heading into the final week. No one else is within a minute, with EF Pro Cycling's Rigoberto Uran at 1:34 and Miguel Angel Lopez (Astana) at 1:45, while Yates, Richie Porte (Trek-Segafredo) and Mikel Landa (Bahrain McLaren) are all just over two minutes back.

Movistar's Enric Mas is finally springing into life, and could still have a say at 3:15, while Quintana is next in line at ninth overall, at 5:08, but with his hopes over after a bruising day on which he struggled with injuries from his stage 13 crash.

There could still be plenty of movement from those riders, but so far none of them have shown that they can get ahead of Roglic, rather than follow him. At this stage, they seem like podium contenders rather than yellow-jersey contenders.

With Pogacar, however, it's a different story entirely. He has looked so good so far that there's every hope that he, in his second Grand Tour, can overcome the seemingly impregnable Roglic and his super-strength team.

However, unlike Roglic, he's going to have to do it alone. UAE Team Emirates have lost arguably their two next strongest riders after Fabio Aru abandoned "with no answers" and Davide Formolo was taken out by a crash. David de la Cruz stepped up and produced his strongest ride of the Tour on Sunday, but it was still not enough to be up there with Pogacar on the final climb. Jan Polanc is the only other climber, and, although he helped set the pace on the first climb on Sunday, he was also unable to be there in the finale.

You sense, then, that Pogacar needs to reduce this Tour to a mano a mano with Roglic sooner rather than later on the Alpine stages, without letting himself be dictated to by Jumbo-Visma. Polanc and De la Cruz could still have a role to play there, and there will be encouragement in the memories of the Pyrenees, where Roglic was isolated and Pogacar was able to attack.

Up against such collective strength, it's perhaps going to take something audacious, something long-range, to unseat Roglic. Most 21-year-olds, riding their first Tour, would hurriedly sign for a spot on the podium, but Pogacar doesn't seem to have received the memo of conservatism that so often governs the Tour. He's been the only GC rider willing to properly attack so far, and he has openly said he'll continue to attack so long as he has time to make up.

He's also said that he's here to win the Tour, and that he won't be satisfied with second place. He was content to follow on Sunday, but he was surely picking his battles, and we can surely expect fireworks in the Alps. It may feel a little like David versus Goliath, when you consider Roglic's support crew and Pogacar's inexperience, but legend tells us that David had a chance all along, and wasn't afraid to have a go.

So while Jumbo-Visma will have been patting each other on the backs on Sunday night, they won't be sleeping easy. Their authority has been stamped on the race, and one former winner – in Bernal – has been stamped out entirely, but a rider who must surely be considered a future winner will be giving them headaches, if not nightmares.

On Sunday, they led the way almost from the start of the stage to the top of the Grand Colombier, some 175km later, but in those final 150 metres, Pogacar emerged to leave a slightly different slant on the day. For all Jumbo's dominance, it was a resounding warning shot. It may now feel like a two-horse race, but this Tour de France is far from over.