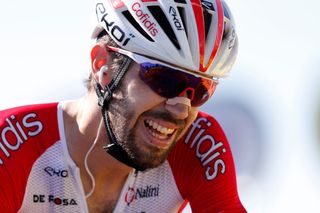 A brave lone chase by Jesús Herrada (Cofidis) of Alexey Lutsenko (Astana) in the closing kilometres of stage 6 of the Tour de France on Thursday provided much of what little emotion there was to a somewhat monotonous day’s racing - as the Spaniard battled hard, if in vain, to get back on terms with his Kazakh rival.

Part of the day-long break with Lutsenko, Herrada was dropped on the final first-category climb, but by riding a steady pace, he managed to close the gap to 25 seconds. But Lutsenko then opened up the throttle again, and the chance of Herrada taking Spain’s first Tour de France stage victory this year evaporated completely.

A former national champion who had a near-miss in this year’s Spanish road race, too - he had a mechanical when almost on the point of winning - Herrada already took a stage win in the Vuelta a España, his home Grand Tour, in 2019, and led it for two days in 2018.

Van Avermaet: That was one of the strongest breaks I've ever been in

Tour de France stage 6 analysis: the Cofidis search for a win goes on

But the Cofidis racer recognised that his chances of his first stage victory on Thursday were all but shattered by Lutsenko’s superiority and, though he did his best to pull back, he could not quite succeed.

"It’s a pity that somebody else was stronger, but success comes at a high price in the Tour," the 30-year-old told Spanish radio.

"After yesterday [Wednesday] when we saw there was no break, we saw that we could try and get in one today," he added. "The eight of us that were in the move were very motivated and we rode hard all day. It was still very hard to get away.

"Then on the first-category climb, I decided to keep going at my own pace and I kept going steady, rather than getting overly involved in using up energy in attacks and on the hardest part of the climb, gradually getting past the other guys one by one. But there was one guy I couldn’t catch, I could see him, but he was a little bit stronger.

"It was a great opportunity to go for it" - and take Cofidis first stage win in the Tour since 2008 - "but people have a lot of energy at this point in the race. I will have another go, though, further down the line."