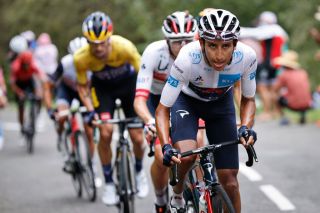 Egan Bernal on the attack on the Col de Marie Blanque on stage 9 of the Tour de France (Image credit: Getty Images Sport)

The final stage before the rest day of the 2020 Tour de France ended with another white jersey for Egan Bernal and with it another congratulatory bouquet, this time handed to a fan who had travelled from Colombia to see him compete.

But rather than more white jerseys, the Ineos Grenadiers leader, who lies second overall after stage 9 through the Pyrenees, is fully focussed on adding to his 2019 yellow jersey haul over the remaining 12 days of racing.

Bernal lost time to new race leader Primož Roglič (Jumbo-Visma) in Laruns – another 11 seconds thanks to time bonuses on the Col de Marie Blanque and at the finish – but he was positive about how his race is shaping up so far.

While he has yet to hit top form since a bout of back pain forced him out of the Critérium du Dauphiné, the 23-year-old looks to be improving as the race goes on – from an uninspiring seventh on Orcières-Merlette to ranking among the four strongest GC men on Sunday.

"I think it was a good day again because it's not just about the time to gain or lost," Bernal said after the finish.

"I think in this part of the race the feeling you have on the bike is also important. The feeling I had today was better than yesterday.

"I'm really happy for that because today I felt that I enjoyed the last climb a lot. It was a really steep and short climb, and you can do a big difference in a climb like this. I was feeling good and it gave me a bit of confidence for the next part of the race.

"I know that I have lost time to Roglič and Tadej Pogačar, but I'm patient and staying focussed and trying to go day by day because this is a race of three weeks and the last stages will be hard."

The Bernal vs Roglič head-to-head battle that has been hyped since the Tour de l'Ain and Dauphiné now looks likely to play out in the second half of the race as the Tour heads east to the mountains of the Massif Central, Alps and Vosges.

With Roglič seemingly on top form since L'Ain, onlookers have speculated that, like at the 2019 Giro d'Italia, he has peaked too early and will fade during the Tour.

Bernal disagrees, praising his rival's intelligence and saying that he'll have learned from his past experiences.

"He was attacking full gas in the last tours and maybe this year he is doing something different, but I prefer to focus on me and I think I'm doing what is best for me. That is to try to go day by day, recover, and strive to do my best in every stage."

In terms of strategy over the remainder of the race, there's set no plan for Bernal to target any one stage, he said. Rather, it's a question of being in the moment and gauging both his own form and that of his rivals before reacting.

Today was not one of those days, according to Bernal. He was one of the main instigators on the Col de Marie Blanque, but still looked behind Roglič in terms of top form when the Slovenian struck out for bonus seconds on the top. Still, there's ample time remaining for a race-winning move.

"It depends on the legs," he said. "Today I tried to take seconds but if you don't have the legs then you can't do anything. The plan is just to wait until the right moment. You need to feel it.

"It's not about saying 'this is the stage we'll attack' or 'this is the climb'. You need to be on the bike, you need to feel it, you need to look at the others and then, when it's the correct moment you can just go and make a big difference on a good day. But you need to have the day.

"Today wasn't that day; the others were really strong and, as I said before, this is the Tour de France, the biggest race in the world, and I'm riding with the biggest. I'm second in the GC, I have a lot of respect for the others, so I should be happy with the result."