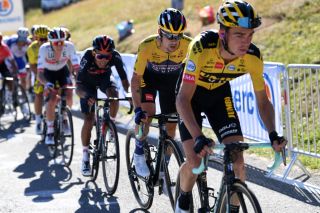 As Primoz Roglic (Jumbo-Visma) confirmed at Orcières-Merlette he is on the comeback trail with a vengeance, Egan Bernal (Ineos Grenadiers) said he is aiming to play a long game at the Tour de France this year - just as he did so successfully in 2019.

Seventh on stage 4, Bernal was always close to the front on the Tour's first summit finish and never looked like he was in danger of getting dropped.

But when Roglic powered ahead, Bernal could not shadow him as closely as his other rivals and time-wise, Roglic landed the maximum punch he could on the Tour's defending champion, thanks to the ten-second bonus for the stage win.

Now sitting in sixth place overall and 17 seconds behind race leader Julian Alaphilippe (Deceuninck-Quickstep) and ten behind Roglic, the Colombian admitted that it is never ideal to lose time as he did on Tuesday. He insisted the Tour's final week, where he made his race-winning moves in the 2019 race, is what is really going to matter again in 2020.

"It was really fast and a really short climb, punchy in the final. It was a good climb to see how the GC riders are," Bernal told reporters afterwards. "I was happy to arrive with them because it was really hard."

"The aim was not to lose time, and I'm pleased not to be losing time on Roglic."

Asked about the back injury that saw him abandon the Critérium du Dauphiné before the final stage, Bernal said that while it had bothered him a little on stage 1 of the Tour, but Monday's easier stage had helped him to recover. At Orcières Merlette, the Tour's first summit finish on Tuesday, "it didn't bother me at all."

Thursday's longer and far more difficult ascent to Mont Aigoual will be a much bigger test of climbing strength for Bernal, Roglic and the rest of the top riders. But for now, rather than take the race by the scruff of its neck on the first summit finish - a tactic Chris Froome used to devastating effect in previous Tours - the Colombian's strategy appears to be to aim for the final part of the race and ride out the Roglic storm as best he can.

"It's not good when another GC rider gets some seconds," he recognised, "but I think we need to be patient. The best scenario is to reach that third week in as good a position as possible and then try to recover what's lost on the long climbs of that week."

"We want to be as fresh as we can for that third week. All 21 stages matter."

Any hopes Ineos might have had that his teammate Richard Carapaz could act as a general classification plan B were dented slightly - but by no means definitively - on Tuesday when Carapaz lost 28 seconds, slipping to 21st overall. Bernal, though, remains very much in the game for now, although Thursday's stage, not to mention the Pyrenean weekend, will pronounce a much more definitive verdict on whether he is coming to the boil more slowly than his other GC rivals, or whether alarm bells need to start ringing in the Ineos camp.