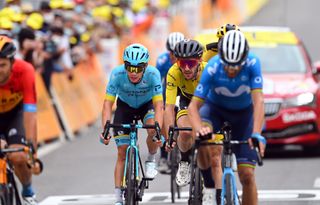 Adam Yates crosses the line at the end of stage 9 in Laruns (Image credit: Bettini Photo)

After four days spent as overall leader of the Tour de France, Adam Yates (Mitchelton-Scott) ceded the yellow jersey after a hectic stage 9 through the Pyrenees from Pau to Laruns.

The Briton, who took over the race lead after Julian Alaphilippe (Mitchelton-Scott) was handed a 20-second penalty for an illegal feed on stage 5, was dropped on the final climb of the day, the Col de Marie Blanque.

Jumbo-Visma had put on a fast pace on the steep slopes, and an isolated Yates was dropped from the shattered peloton two kilometres from the top on the double-digit gradients.

By the top he was a minute down, with another chase group between him and the Roglič group. He was joined by a number of riders on the descent, but no teammates, and rolled over the line 54 seconds down on the leaders.

The result, plus the time bonuses accrued by Roglič taking second on the Marie Blanque and at the finish, sees Yates fall to eighth overall, 1:02 down on the Slovenian. The 28-year-old said after the finish that his yellow jersey experience was fun while it lasted adding that stage wins are now the goal.

"I did my best. I knew coming into the race I wasn't 100 per cent," Yates said after the finish. "I gave everything I could to hang on. I think we can be proud of what we did. I'll freshen up now, have a rest day and then go after some stages.

"We'll see what happens with the rest of the race. The next couple of days are flat - there might be crosswinds so it could be pretty interesting. I said from the very beginning there were a lot of stages in the last week that suit me quite well so we'll have a go and see what we can do.

"It's a big honour to ride in yellow. It was good fun while it lasted."

Mitchelton-Scott directeur sportif Matt White said that stage wins were always the objective for the team and they'll go back to that now that they aren't holding yellow.

"We came into this race with the objective to go hard in the first week to look for stages," he said. "That turned into the yellow jersey, we kept it for a few days, and now we can go back to the original plan to target some stages."

There might be a wait until Yates can challenge for wins again, though, with his GC position still too dangerous for him to get free reign to attack on the flatter and rolling stages of the next five days.

"I think we'll have to wait and see. We've got a rest day, a couple of easier days and then the next real test for the GC guys doesn't come until next Friday. But there are some good stages for the intermediate rider – stages 12 and 13 – but I think with Adam's position they probably won't be so viable until we get back into the mountains."