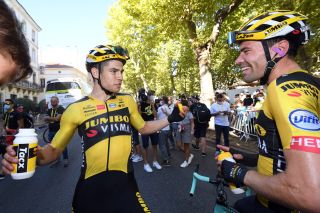 It was a breathless day of racing at the Tour de France on stage 7, after which Tom Dumoulin confirmed that Jumbo-Visma had collaborated with Ineos Grenadiers and Groupama-FDJ to gain as much time as possible on their rivals in the echelon that formed the last chapter of Friday's stage.

The gap of 81 seconds on the main group of chasers could have been even higher, but Ineos stopped working when it became clear that Richard Carapaz, who seemed to be enjoying the status of an unofficial 'plan B' within the team, was doomed to lose time after he punctured late on.

Groupama-FDJ stayed at the head of affairs together with Astana on the final run-in to Lavaur, but Jumbo-Visma, who also collaborated fully, were definitely the biggest winners on the day as the Dutch squad claimed their third stage win in seven days.

Moving up one spot in the Tour de France general classification to fifth place, Dumoulin's delight was palpable as he and Wout van Aert congratulated each other on the Belgian's second win at this year's race. The fact that Jumbo-Visma were operating with a limited amount of firepower, but could still pull it off, surely added to the pleasure.

Dumoulin explained to NOS that two of their riders, Tony Martin – who would normally have been key on a crosswind stage – and Amund Grøndahl Jansen had been shed from the main peloton as the pace cranked up on the first climb. They only had Van Aert and Robert Gesink to keep Roglic out of the wind.

"I don't know what Wout has," Dumoulin said. "He stays with Primoz all day long and then turns out a sprint. Incredible."

Dumoulin was surprised but very pleased that his teammate had taken such an impressive win, saying, "Somehow it worked out today." Along with Van Aert, he singled out George Bennett and Sepp Kuss for giving their maximum in the finale, despite being featherweight climbers.

"We knew where the race was going to break apart, and it broke there. And it is great that Wout finished it off," Dumoulin said.

The former double Tour de France podium finisher and Giro d'Italia champion said that they had heard that Tadej Pogacar (UAE Team Emirates), Bauke Mollema (Trek-Segafredo) and Mikel Landa (Bahrain-Merida) had been caught out when Ineos surged out of Castres, and from then on there was only one course of action possible.

"That's why we started driving. It couldn't have worked out better," he said.