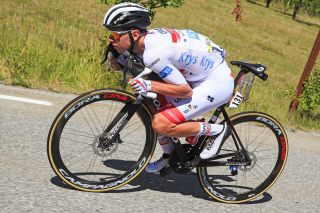 As predicted, the Vent d'Autan blew the Tour de France apart on stage 7, with first Bora-Hansgrohe and then Ineos Grenadiers shattering the peloton and costing several contenders significant time in the overall classification.

The Slovenian finished with the second group, losing 1:21 to race leader Adam Yates (Mitchelton-Scott). Pogacar is now 1:28 off yellow with Mikel Landa finishing in the same group as Pogacar and heading into the Pyrenees a further six seconds back on GC.

"We knew in the final section that it would be hard so we were rying to move to the front but someone crashed in front of us and I ended up behind the group when it split," Pogacar said at the finish.

Deceuninck-QuickStep's coloured chains at the Tour de France: What are they and where can I get one?

"I tried to close the gap but the speed was really up. The team gave everything to try and bring me back and did their best to minimise the loss. It's just a minute or so, It's not ideal but I'm not worried. We will try another day. "

It was an absolutely frantic day of racing on the 168km route from Millau to Lavaur with Bora-Hansgrohe attacking on the first climb to split the bunch and send green jersey holder Sam Bennett out the back along with many of the sprinters including stage winners Caleb Ewan (Lotto Soudal) and Alexander Kristoff (UAE Team Emirates). All of the GC favourites made that split but later in the stage several contenders came to grief: Marc Soler (Movistar) had a crash, Bauke Mollema (Trek-Segafredo) punctured and was forced to chase with 54km to go. Pogacar punctured, too, but chased back on.

But then, inside 25km to go and with a strong tailwind, Ineos went to the front and forced another split in the front group, catching out Mikel Landa (Bahrain McLaren), Mollema and teammate Richie Porte, Pogacar, Dan Martin (Israel Start-Up Nation) and Esteban Chaves (Mitchelton-Scott) on the wrong side of the gap.

Richard Carapaz (Ineos) had a mechanical and lost contact with the leaders, finishing with the Pogacar group.

Bora-Hansgrohe director Enrico Poitschke was pleased to see Peter Sagan re-take the green jersey from Sam Bennett (Deceuninck-Quickstep) even though Sagan missed out on contending for the stage win because of a mechanical in the sprint. The team's GC leader Emanuel Buchmann made it into the lead group and is now at 22 seconds from Yates in 12th.

"We were happy with the cross/cross-tailwind and also with a hard start to the stage," Poitschke said. "We like to do a hard race, early attacks and especially on the second climb, 3km long with a crosswind, we planned to go as hard as possible. The first guys were dropped and we continued, the whole team did a fantastic job until the end. We were also hoping we could fight for a stage win but we were fine with Emmanuel and Peter there with the first group. We had bad luck with Peter, he had a technical problem. But the guys did a fantastic job. It was a good day for the team."

Bora-Hansgrohe alone carved out most of the advantage on the other sprinters but profited from Ineos' help in tailing off the other GC riders.

"It was hard to work so long alone, with only a small bit of help from other teams, but the guys showed how strong they are. It cost energy for sure, but not only for us. We saw a lot of guys having problems in the crosswinds. We dropped some guys on GC."