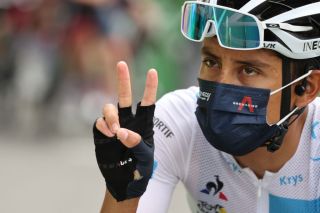 Egan Bernal’s Ineos Grenadiers team, Mitchelton-Scott, AG2R La Mondiale, and Cofidis will not risk expulsion from the Tour de France if a second COVID-19 positive is recorded among their riders and staff in rest-day testing next Monday, race organiser ASO has confirmed to Cyclingnews.

In an apparent overnight change in position, ASO and the UCI, in consultation with the French government, have decided to reset any counter before the next round of planned COVID-19 testing, which will take place on and around the second rest day in the Alps.

“We are resetting the counters for the next round of tests. However, if before those tests one of the four teams has another positive then they will be out,” a source told Reuters.

ASO confirmed the reset to Cyclingnews.

Tour de France: How teams are handling COVID-19 pandemic behind the scenes

The special Tour de France Covid-19 protocol states that if two members of a team's riders and staff test positive for the virus within a seven-day period, the whole team will be excluded from the race.

If another case emerges in the four teams this week, then they would be removed from the Tour de France. However, the confirmation that the case counter will reset to zero ahead of the second rest day means that the four teams are no longer on quite the same knife-edge entering the next round of mass testing.

ASO and the UCI confirmed on Tuesday, before the start of stage 11, that staff members from  Ineos Grenadiers team, Mitchelton-Scott, AG2R La Mondiale, and Cofidis tested positive in the rest day testing.

Race director Christian Prudhomme and a technical staff member working in the race bubble also tested positive. All left the race to self-isolate, with some teams also sending other staff home who had shared a room with the four confirmed cases.

The positive test on each of the four teams has understandably left them on edge. 2019 Tour de France winner Egan Bernal could have seen his chances of a second victory destroyed if another staff member tested positive on Monday. News that the counter resets to zero at the second rest day reduces that risk but does not totally remove it.