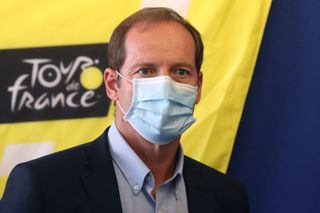 Despite all 166 riders left in the Tour de France testing negative for coronavirus, the race director Christian Prudhomme has tested positive and will now leave the race for eight days.

After reports emerged in the French media, race organiser ASO confirmed the news on Tuesday afternoon, just ahead of the start of stage 10, and shortly after announcing that no riders had tested positive, but that four staff members from four separate teams had.

In the statement, ASO explained that Prudhomme was not part of the ‘race bubble’, and was not obliged to undergo a test on Monday’s rest day, but did so anyway, as he had done on three occasions ahead of the race, on August 6, 20, and 27.

Given he is not part of the bubble, he won’t have to leave the race entirely, but will instead follow French health guidelines and self-isolate for a week. He will be replaced by current ASO sporting manager, François Lemarchand, but is expected to return to the race for stage 17 on September 16.

“The testing campaign revealed that Christian Prudhomme has tested positive for COVID-19. The Director of the Tour de France, taking his fourth test in one month, will now quarantine for seven days,” read the statement from ASO.

“Although he was not part of the ‘race bubble’ and had not been in direct contact with any of the riders and their entourage, Christian Prudhomme still decided to get tested.”

“The Anti-COVID-19 protocol, which proves reinforced protection for the ‘race bubble’, distinct from others in the organization, allows for the following plan to be put in place following such a situation. In the absence of Christian Prudhomme from the 10th stage from Ile d’Oleron to Ile de Re up until the 16th stage from la Tour du Pin to Villard de Lans, Francois Lemarchand, who was in the lead car on Paris-Nice, will occupy Christian Prudhomme’s place in the lead car.

Jean-Michel Monin, meanwhile, will replace Francois Lemarchand in the number 3 car.”Prudhomme himself spoke to French news agency AFP, confirming he would be absent from the Tour for the first time since he took up the role of race director in 2006.“From the information I’ve been given, it [the virus] has just arrived,” said Prudhomme. “I’m leaving the Tour for eight days. I’m going to do as any other French worker would in this situation. I’m going to watch the Tour on TV, which I haven’t done for 15 years.”

“The riders live like monks, which isn’t the case for me. It’s for that reason that I don’t belong to the race bubble and don’t have contact with the riders,” he added, before telling France 3: “No rider is positive, and that’s the most important thing for me. That shows that this bubble is working.”

Prudhomme, a former journalist, first worked alongside former Tour director Jean-Marie Leblanc in 2006 before taking sole responsibility of the role from 2007. His role sees him meet with local officials, authorities and guests during the pre and post-stage ceremonies. During the race, he rides in the lead organisation car, waving the race underway from the sunroof each day once the riders reach kilometre-zero after the opening neutralised zone.

He regularly hosts special guests in the car, and has continued to do so during the 2020 Tour de France, with French prime minister Jean Castex in there on Saturday’s stage 8 in the Pyrenees. Le Parisien has since reported that Castex will now undergo a test and will not be able to attend a government seminar in person on Wednesday.