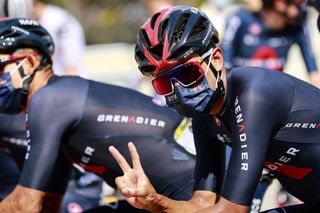 Tour de France organisers ASO and the UCI have confirmed that four staff members from the Cofidis, AG2R La Mondiale, Ineos Grenadiers and Mitchelton-Scott teams tested positive for coronavirus during PCR swab testing carried out during the first rest day.

After a morning of rumours and chasing team buses, French newspaper L’Equipe, which is also owned by ASO, reported that no riders had tested positive. However, L’Equipe later confirmed that race director Christian Prudhomme had tested positive and had left the race and then ASO and the UCI revealed that staff from Cofidis, AG2R La Mondiale, Ineos Grenadiers and Mitchelton-Scott had also tested positive.

Despite the positive cases in the ‘race bubble’ the Tour de France will continue on Tuesday, with riders facing a potential day of echelon racing on the coast roads between Ile d’Oleron and Saint-Martin-de-Ré on the central west coast of France. Primoz Roglic (Jumbo-Visma) wears the race leader’s yellow jersey after a strong rider in the Pyrenees at the weekend.

ASO and the UCI confirmed that they have left the race bubble.

Teams apparently knew of their test results well before the stage started but were told to await official communication from ASO and the UCI before confirming their test results. However, a number of teams indicated they were all clear to continue in the Tour de France by posting messages on social media about their enthusiasm and goals for the second week of the race.

At one point a member of the Deceuninck-QuickStep team staff was seen being taken away by a race ambulance, apparently for secondary testing, but the riders later boarded their team bus for the journey to the start.

The Belgian team moved quickly to clarify that the staff member’s second test was negative.

“An error was made in the laboratory with the sample that the individual gave yesterday, meaning they were taken for retesting this morning. The result of this second test has been returned as negative and we will continue to race as normal,” a team spokesperson said.

Around 650 riders, team staff and race officials in the protective ‘race bubble’ underwent testing between Sunday morning and Monday afternoon.

The Tour de France COVID-19 medical protocol rules were changed in the run-up to the race start on orders of the French medical authorities and mean that teams will be ejected from the race should any two individuals among riders and staff test positive. Teams wanted to differentiate between the eight riders and staff but with the number of COVID-19 cases growing rapidly in France, the French government overruled a UCI-ASO agreement and confirmed the ‘two strike, team out’ rule.

After several cases of false positives in the peloton in recent weeks, concerns were raised over the possibility of teams being ejected from the Tour only to later test negative.

According to reports by French television, the 650 COVID-19 tests were sent to Paris for overnight testing. The follow-up testing was carried out at the race at the mobile testing lab created by race organisers ASO.

In the days leading up to the Tour de France Grand Depart in Nice, two Lotto Soudal staff members were sent home after testing non-negative, though at a time when the race rules specified that two riders testing positive would force the team out of the race. One staff member was later confirmed as positive.

There is also no plan in place specifying at what point in the race a valid winner can be declared, should it be halted before Paris.