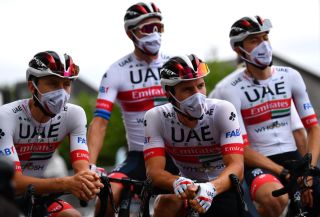 The UAE Team Emirates squad are following strict protocols – both those imposed by the UCI and ASO, and internal team measures – when it comes to the coronavirus at the 2020 Tour de France (Image credit: Getty Images Sport)

Amid all the furore of an intense and unpredictable GC battle, one ongoing Tour de France war had drifted somewhat to the back of the news cycle, only to re-emerge with full force as the rest-day dawned: the COVID-19 pandemic.

The lack of positive tests since the Lotto Soudal team-staff cases during the build-up in Nice is obviously a situation where no news really is good news, although ASO's next round of testing of the riders is due today [Monday], with results set to be published on Tuesday morning.

Thus, despite the relative calm, the Tour remains hanging over the same pandemic-shaped precipice as it has done for the last 10 days, and it will do so all the way to Paris.

For the teams, then, keeping their 'bubbles' as healthy as possible under the circumstances is critical. And it's worth remembering that behind the scenes, regardless of the number of stages ticked off or yet to come, the squads' daily grind of applying numerous procedures to keep risks to a minimum will remain unchanged.

"We have a 40-page protocol to cover every single aspect of what we do," says Jeroen Swart, Head of Medical at UAE Team Emirates, who drew up the document for his squad. "It's evidence-based, and aims to guide the riders and staff in all their activities."

Established one month in advance of the Tour, or earlier, Swart looked at a number of different research documents from other sports, particularly football, and the measures they had taken, as well as introducing his own work and conclusions into the protocols.

"We do everything from the typical measures – the ones that everybody knows about, like masks and hand-sanitising solutions in multiple places in the bus and vehicles – to extra measures, like having an air filtration unit installed in the bus to help eliminate viruses and other contamination.

"Then we have other protocols, from how we manage preparation of food, to massages, and pretty much everything else that goes on on a daily basis."

Protocols are also adapted to each individual's professional activities within the team as well, while another UAE-specific measure is that Swart has introduced extra levels of testing beyond those required by the UCI's health regulations and those carried out by ASO on each rest day. Each individual in the UAE Team Emirates Tour bubble has been tested three times, pre-race, with other ongoing tests taking place during the Tour.

"We'd struggle to do anything more than we already are," Swart claims.

However, in any circumstances – but particularly in an operation with so many moving parts, such as the Tour de France – there is no upper limit, and no such thing as zero risk when it comes to taking on COVID-19.

Furthermore, Swart argues, "We've seen repeatedly that this virus continues to surprise us, so there is no way to say that we're at a point where we cannot fail.

"The reality is that we just need to reduce the risk as much as we possibly can, and then see whatever surprises are in stall for us. We'll find out."

Each squad has elements of its own strategy, depending on their medical team's criteria. But Swart says that team doctors have been communicating at length to discuss best practice across the board, and to pool strategies where possible.

"We're lucky enough to have sufficient resources to do pretty much whatever I, as the Head of Medical, dictate we should do, and hopefully that'll take us through safely to Paris," Swart says, although he recognises that not everybody has economic pockets as deep as UAE Team Emirates. As he puts it, "Finances, obviously, form part of the equation as to what measures a squad can take."

UAE Emirates had one of the very first COVID-19 cases at WorldTour level back in March, with Fernando Gaviria testing positive for the coronavirus during their home race, and Swart recognises that the situation that arose operated as a full-scale warning and insight for the team into "how quickly it [contagion] can get out of control".

"We had a single individual as the earliest case, and I don't suspect that anybody else had it," he says. "But despite isolating him at the very onset of his symptoms and taking other precautions, like wearing masks, we ended up with eight individuals who contracted the virus.

"It gave us a very good indication of how quickly things can unravel, and how aggressively we need to pursue containment measures should something happen," Swart continues. "I hope other teams and individuals understand how fast it can get out of control."

Handling the virus is a learning curve for everybody, but Swart says that, as yet, there have been no alterations to the UAE Emirates protocols during the Tour itself to date.

"But who knows?" he reflects. "We're still in the early days, and anything could happen – but certainly we can adapt things on the fly."

The general weakening of riders' immune systems as the toll of stage racing day after day kicks in is, says Swart, one widespread upcoming risk that ASO "have anticipated".

One way of doing that, he explains, is that "in their protocols there are steps to address individuals who may have symptoms, but may not necessarily have COVID, so the facility for testing prior and after stages is available every day of the Tour, not just on the rest days".

Results are available in a maximum of six hours, and isolation measures, if needed, put into effect during that time.

Overall, Swart argues, "I think it's as good as we can hope for in terms of what we can or can't do, and we'll have to live with those situations as and when they arise.

"The lucky thing is that at this Tour, everybody is wearing masks and washing their hands regularly, and we're in bubbles. That also reduces the risk of the viral infections specifically, and that probably will reduce incidence of those kinds of illnesses as the Tour progresses.

"Obviously there are other possibilities: risk of bacterial infection that occur in normal organisms, sinusitis, and so on. But certainly I suspect the infection rate would be lower than you'd normally get in a Tour. We'll see in the final week, but logic dictates that would be the case," he says.

ASO's 'two strikes and you're out' rule, which was briefly eased during the Tour's build-up, was reinstated in full from stage 1 onwards as a result of the French government's toughening up of health regulations. But there were also meetings between team doctors and ASO prior to the Tour, Swart says, and some health protocols were altered as a result.

It remains to be seen how long all of these teams' measures will remain in place. But given the current development rate of vaccines, and the time that would then be required for mass production and rollout, there is next to no chance that they will be lifted before the end of the 2020 season.

Rather, Swart predicts that they will probably continue for "at least" another six months. That would place a hypothetical easing of conditions in March next year – well into the early season of 2021.

"From thereon, I'm sure there will be a progressive a reduction of risk, and we can alter the protocols appropriately," Swart says.

But for now, the teams' behind-the-scenes battles will continue just as fiercely as, if not more so than, the ones we see in front of us on the TV screens every day at the Tour.