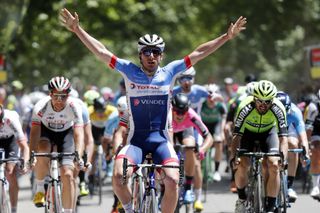 Total Direct Energie have announced the extension of sprinter Niccolò Bonifazio's contract, and have also announced the signing of Bonifazio's brother, Leonardo, and Geoffrey Soupe to strengthen the French team's sprint train.

Taaramäe, Sicard and Cousin among six riders retained by Total Direct Energie for 2020

Niccolò Bonifazio joined the Pro Continental team in 2019 after two years with Bahrain-Merida, and has enjoyed a successful first season, in which the Italian took seven victories: three stages and the overall at La Tropicale Amissa Bongo, a stage at the Vuelta Ciclista Comunidad de Madrid, and victory at one-day races the Omloop Mandel-Leie-Schelde Meulebeke and the Grote Prijs Jef Scherens – the latter two on consecutive days on the last day of August and the first day of September.

While a really big win still eludes him, Bonifazio's third place on the final stage of the Tour de France on the Champs-Elysées – the so-called 'sprinters' world championships' – demonstrated that the 26-year-old has the talent to mix it with the best in the world on the biggest stage.

And that talent is exactly what Total Direct Energie team manager Jean-René Bernaudeau is hoping to further develop by extending Bonifazio's contract for the next two seasons – safe in the knowledge that the team has secured invites to the WorldTour races for at least the first of those two years, having topped the Pro Continental rankings in 2019.

Bonifazio and his team management and teammates will also hope that translates to a sprint win on home soil at the Tour, and the Italian's sprint train has been strengthened by the arrival of his older brother Leonardo from Italian Continental team Sangemini-Trevigiani-MG.Kvis and French rider Soupe, who's spent the past four seasons with Cofidis.

Twenty-eight-year-old Soupe's time at the rival French team corresponded with that of sprinter Nacer Bouhanni, although Soupe's opportunities to work directly with him were limited by what became an unhappy relationship between Bouhanni and the team, eventually resulting in Bouhanni's move to Arkéa-Samsic for 2020.

Soupe, therefore, "wants to take on new challenges", according to a Total Direct Energie press release, and leading out Niccolò Bonifazio at some of the world's biggest races should provide him with the challenge he's looking for.