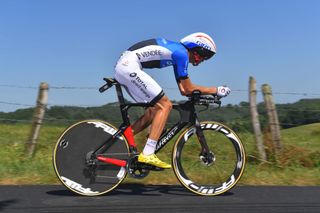 Pro Continental team Total Direct Energie have announced the re-signing of six riders for the coming season, including Jérôme Cousin and Romain Sicard on two-year contracts, and Rein Taaramäe on a one-year contract.

The three other riders retained are Fabien Grellier, Paul Ourselin and Simon Sellier, with the former two signed until the end of 2021 and Sellier for 2020.

Taaramäe is the only rider among them to have taken a race victory in 2019, with the 32-year-old Estonian winning the national time trial title for the fourth time in his career. His past victories include stage wins at the 2011 Vuelta a Espana while riding for Cofidis and at the 2014 Giro d'Italia for Katusha-Alpecin, from where he joined his current team in 2018.

Like Taaramäe, 30-year-old Cousin – a stage winner at the 2018 Paris-Nice – will head into his third season with the team in 2020, while 2009 under-23 road race world champion Sicard, also 30,  is one of the longer-serving members on the squad, having joined Jean-René Bernaudeau's team in 2014.