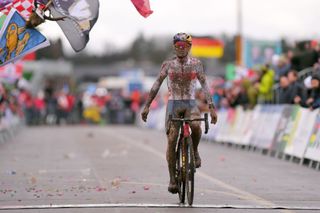 Tom Pidcock feels that his silver medal in the elite men's race at the UCI Cyclo-cross World Championships is a stepping stone to battling with Mathieu van der Poel in future years.

The 20-year-old British rider, in his first year in the elite category, held off a host of Belgian challengers to take silver in the battle behind runaway winner Van der Poel.

Van der Poel is five years older than the rising British star, who feels he needs two more years of development before taking on the world champion.

"It's probably my best cyclo-cross ride, as I'm now second in the world behind Mathieu, so that's not bad at all," said Pidcock.

"I'm not often happy with second, even in the elites, but today it felt almost like I won the race. It was Mathieu's race to lose and it was pretty special coming second. This is the stepping stone and if I start becoming best of the rest then I start racing Mathieu.

"He is four or five years older than me so soon we will come to our peaks and then we will see. I think maybe next year we could battle in a few races and then the year after then we properly race."

Pidcock attacked a group of Belgian riders at the mid-way point before holding off the challenge of Toon Aerts and Wout Van Aert to take silver.

"I thought that the best form of defense was attack so that was my plan," he said. "I got a gap and blew Eli [Isebyt] off my wheel and then Toon was just there and the gap was just yo-yoing at eight, seven, six seconds and the last four laps were just brutal.

"Through the mud, every lap it was getting harder and harder and it was just one of those races where you have just got to try and pace yourself in the first few laps especially. I took a few laps and then I thought I'd just attack and see what happens."

Pidcock is next targeting the U23 mountain bike World Championships and will begin his preparations by competing in Cape Epic alongside Florian Vogel.

"I'm going to do mountain bike mainly until the end of June and finish at the Worlds, he said.

"I think I'm going to try and win the under-23 mountain bike worlds. I'll ride Cape Epic with Florien Vogel and go there to learn and it's just an experience I think.