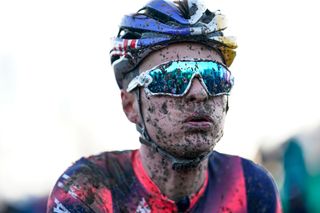 Tom Pidcock (Great Britain) has set his sights on a top-five placing at next weekend’s Cyclo-cross World Championships in Switzerland.

The 2019 U23 world champion finished seventh in the ultra-fast final round of the World Cup on Sunday, as Mathieu van der Poel (Alpecin-Fenix) stormed to yet another victory.

The Dutch rider will head to the World Championships as the prime favourite for the rainbow jersey, as he looks to defend his title, but Pidcock is one of a number of riders vying for a top placing.

On Sunday, the 20-year-old remained with the front group, and even set the pace at various stages, until Van der Poel broke free with several laps remaining. He would eventually fade but the U23 Paris-Roubaix winner still had enough in the tank to sprint for seventh on the line.

"That was super fast. Simple as," Pidcock told Cyclingnews at the finish line.

"It was just ridiculous. It was just a bunch the whole way and then super fast. The one climb made the difference and it was a bit soft with the grass there. That’s where Mathieu attacked and that was my weakest point on the course. I can still be pretty pleased with that. It was just down to power but I was still up there fighting, so it wasn’t bad."

Pidcock finished fifth in the penultimate round of the World Cup in Nommay but he and his coach stood at the finish in Holland and openly discussed their belief that the rider was moving in the right direction as the Worlds approach.

"I can see a little bit of progression," Pidcock told Cyclingnews. "I think that a top-five next week would be good for me. I go back to Belgium tonight and then I fly to Worlds on Friday."

The World Championships take place February 1-2 in Switzerland. Pidcock will be the only rider from Great Britain competing in the elite men's race, and he will be up against defending champion Van der Poel and a selection of Belgian riders including Pidcock's former U23 rival Eli Iserbyt, Wout van Aert and Toon Aerts.

Evie Richards, who finished strongly in Hoogerheide to take fifth, will lead the charge for the Great Britain’s women’s team.