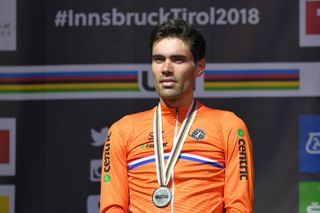 Jumbo-Visma's Tom Dumoulin – one of the team's three leaders, along with Steven Kruijswijk and Primoz Roglic, for this year's Tour de France – has told the Dutch media that he's unlikely to be able to ride the time trial at either the National Championships or the World Championships due to his focus on the Tour.

The 29-year-old told NOS.nl on Monday that neither the Dutch championships, which take place the week before the start of the Tour, nor the Worlds TT, which is currently still scheduled for the last day of the Tour, fit around his race programme for this year's shortened racing season.

"I have a very busy programme with altitude training camps and other races," the three-time Dutch time trial champion explained. "Between the Critérium du Dauphiné [August 12-16] and the Tour [August 29-September 20], it's not possible to get back to the Netherlands for the National Championships, so I'll just stay in France."

As reported last month, Dumoulin is likely to stick to a French racing programme in the build-up to the Tour de France, while he and the team's Tour squad will base themselves in Tignes in order to participate in training camps in the French Alps in both July and August, limiting exposure to the coronavirus by minimising travel.

Dumoulin to prepare for Tour de France in French races

He also dismissed the possibility of quitting the Tour early in order to ride the Worlds time trial if it does remain scheduled for September 20 – the final day of the Tour – echoing his Jumbo-Visma team's comments to Wielerflits.nl late last month that it wouldn't make Dumoulin available for the national team due to the clash with the Tour.

"The individual time trial at the World Championships was always on a Wednesday," the winner of the 2017 event said, with the road race normally taking place four days later. "I don't think anyone had a problem with that, so it was already a strange move to move it to the Sunday [a week ahead of the road race]. It seems that it would be very easy to reverse that in these circumstances. But, for the time being, the UCI is sticking to Sunday."

Dumoulin said that he'll try to finish the Tour "even if I have bad legs and I don't feature in the general classification race".

"Hopefully one of the team's three leaders will still be up there, in which case I could still be very valuable, even if I'm not going well," he said.

He said that whether he's still in overall contention or not, he's earmarked the Tour's only time trial – a 36km individual TT with an uphill finish on La Planche des Belles Filles on the penultimate day of the race – as a stage on which he's keen to shine.

"That time trial should suit me perfectly," Dumoulin said. "The first 30 kilometres are a bit 'French flat' [undulating], and then you hit La Planche for the last seven kilometres. It's very similar to the 2017 Worlds TT course in Bergen [Norway], where I became world champion.

"Hopefully I will be fighting for the GC at the Tour, though. But then I'd arrive in Paris completely spent on the Sunday, and would have to ride the time trial at the Worlds with tired legs," he said, envisioning a scenario whereby the race was moved to the Wednesday. "Those not riding the Tour won't have that same problem."