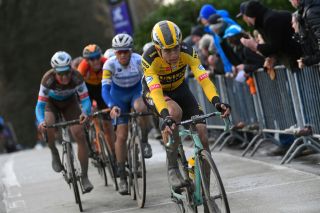 Wout van Wert – pictured at the 2020 Omloop Het Nieuwsblad – is likely to ride both the Tour de France and a number of the major one-day Classics for Jumbo-Visma in the second half of the 2020 season (Image credit: Getty Images Sport)

Jumbo-Visma will split its team in half for two separate upcoming training camps, with the bulk of the Classics riders heading for Gerlos, Austria, this month, while the riders selected for the Tour de France will attend two altitude training camps in Tignes, France.

The team said on their website that what would be a very similar formation to the eight riders tackling the Tour will ride the Tour de l'Ain [August 7-9] and the Critérium du Dauphiné [August 13-20] before returning to Tignes for a second camp. George Bennett, Tony Martin, Sepp Kuss, Robert Gesink and Wout van Aert – who's likely to ride both the Tour de France and many of the Classics – will complete the line-up for the start of the Tour in Nice on August 29.

"We would like to create a kind of bubble by having the Tour team race and train together for a major part," Jumbo-Visma's head of performance, Mathieu Heijboer, said, with the coronavirus pandemic front of mind.

Wynants set for retirement after 2021 Paris-Roubaix

"Last year, we went to Tignes for the first time in preparation of the Tour de France. We really liked it, and that's why we've chosen to do our preparation in Tignes again," he said.

Meanwhile, the team's Classics riders will this month head to Gerlos, in Austria, for a separate two-week training camp. The team said on its website that Jos van Emden, Koen Bouwman and Timo Roosen would be among the riders taking part.

"We're looking forward to having a big part of the team together again," team trainer Tim Heemskerk said. "It's nice to be with the riders and staff after a period of solely training and preparing. In the past months, the riders have kept their shape at a good level. With this training camp, they can ride on the road together again.

"We'll do specific training in preparation of the Classics in August, like Strade Bianche [August 1] and Milan-San Remo [August 8], but also for stage races like the Tour of Poland and the Vuelta a Burgos. The area of the Zillertal [in Austria's Tyrol region] is the perfect training location because of the nice climbs and the possibilities to ride on flat roads," Heemskerk said.

"All riders have continued to train with their trainers," Heijboer added of the riders' activities ahead of the training camps. "They have remained fit in a professional manner. We know that everyone is in good shape, and we leave for the training camps with great confidence that we'll be able to ensure that we start the month of August in optimal shape."