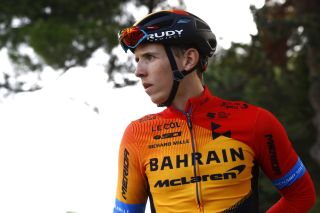 Dylan Teuns (Bahrain McLaren) came back from the brink on stage 1 of Paris-Nice to take second on the stage and build a platform for his GC aspirations in the process.

On a day hit by crosswinds and driving rain, the Belgian found himself struggling in the third echelon when the peloton split several times in the final 62km. It looked as though Teuns’ overall ambitions were over but with strong support from his team, and with several rival GC contenders also forced to chase, the Belgian eventually made contact with the front of the race at a crucial point.

“When the dangerous part started with the echelons, me and the other guys took the wrong side of the road, and we were a little bit blocked. We had to jump on the good road again, and that’s why I was in the third group at the crucial moment. With the help of my teammates, we quickly made it to the second group. They put in hard work to get me and Pello Bilbao into a good position again. They worked really hard to bring us to the first group,” Teuns explained.

Even though Teuns survived the first scare, he and his team then had to bring back Julian Alphilippe and Tiesj Benoot after the pair escaped at an intermediate sprint with around 30km remaining.

Step forward Ivan Garcia Cortina. The young Spaniard who was making his return to racing after a brief illness sacrificed his chances of competing in the sprint by chasing down the two leaders on Teuns’ behalf and by the foot of the final climb Teuns was in position to launch an attack.

The Bahrain McLaren rider surged clear from the chase group with Maximilian Schachmann with less than 4.5km to go and on the descent the pair linked up with Benoot and Alaphilippe to make the winning move.

In the sprint, Schachmann was too fast for his rivals with the German national champion taking the stage and the first leader’s jersey on the race but second place for Teuns ensured that he put 21 seconds into the main field and most of his rivals for top honours. The Belgian sits third overall, four seconds off the lead.

“When we made it there just before Benoot and Alaphilippe attacked, Ivan Cortina took the responsibility to chase back the two strong guys. On the final climb, I saw the moment to attack. I waited a little bit because I saw a guy was a little bit behind, so we were two against two and we could get back to the two riders in front. I started the sprint a little bit early because I forgot it was a headwind and Schachmann came really strong. I’m happy with second place.”