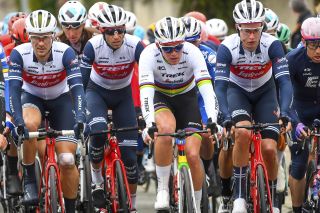 Vincenzo Nibali (Trek-Segafredo) came through his first test at Paris-Nice to finish in a group of main GC contender on stage 1. The race was split several times by crosswinds and crashes, but Trek-Segafredo, and primarily Jasper Stuyven, kept Nibali out of danger when the race was ripped to pieces.

While the spoils on stage 1 went to German Maximilian Schachmann (Bora-Hansgrohe) after a four-rider group formed in the closing stages, Nibali crossed the line 15 seconds down at the finish.

It could have been far worse for the former Tour de France winner after several teams split the peloton into pieces inside the final 60km and Nibali had been caught in one of the chasing groups.

Paris-Nice: Bardet and others down and out as puncheurs steal a march on climbers in crosswinds

However, with Stuyven by his side and additional firepower from several teams that needed to chase, Nibali brought himself back into contention. Nibali sits just outside the top 20 on GC and is 25 seconds down, but with stages in the mountains still to come the Italian decided to draw on the positives after witnessing several other overall contenders lose minutes rather than seconds.

"The feeling was good, but the difficulty was the cold and the whole day was fast. There were many sections with crosswind, but the whole time I had the support of the team, and the last 50km with Jasper, who was always keeping us near the head of the group,” Nibali said after the stage.

“We didn't take risks and I think overall it was a good day. Regarding the general classification, I'm taking it day by day. For me, today I didn't have many problems and tomorrow we have another stage with more danger of winds and more narrow roads, which can be dangerous.”

Stage 2 could be equally problematic for the peloton if the wind once again picks up. For Nibali, the aim will be to ensure that he remains near the front of the peloton at all times. Conceding almost half a minute to Shachmann with a time trial coming up later in the week could prove problematic, while Dylan Teuns (Bahrain McLaren), Tiesj Benoot (Team Sunweb) and Julian Alaphilippe (Deceuninck-QuickStep) all gained time as well.