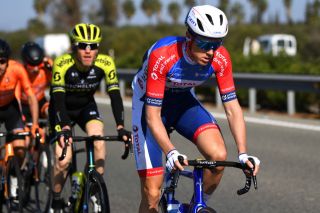 Niki Terpstra in action at the 2020 Vuelta a Andalucía (Image credit: Getty Images)

Niki Terpstra has ridden his bike for the first time since a serious crash suffered while motor-pacing in mid-June. The Dutchman, who rides for Total Direct Energie, swerved to avoid geese while out training and hit a rock, with his injuries including a collapsed lung, a concussion and a fractured collarbone.

Terpstra posted to Twitter and Instagram on Monday, detailing where he is in his rehabilitation from his injuries, which are expected to keep him from racing for 10 to 12 weeks.

"Really happy I could start rehabilitation process with treatments and exercises by physiotherapist under supervision of the team," he wrote on Twitter.

"Thanks to the good recovery, I was able to do my first bike rides. Not smooth or fast – that's still a long way to go – but the first steps have been taken."

Terpstra also posted a photo of himself working out in the gym with a physiotherapist on Instagram.

The 36-year-old, who won Paris-Roubaix in 2014 and the Tour of Flanders in 2018, was airlifted to hospital in the Netherlands, where he spent time in intensive care before being released four days later.

The crash was Terpstra's second major setback since moving from Deceuninck-QuickStep to Total Direct Energie at the start of 2019. After a solid start to his opening Classics campaign with the French team, which included third places at Kuurne-Brussel-Kuurne and Le Samyn, he crashed out of the Tour of Flanders, suffering a concussion that took him out of action for over a month.

He recovered for the Tour de France, making it 11 stages into the race before abandoning the race with a fractured shoulder blade after a mass pile-up on the road to Toulouse.

Terpstra finished second at Paris-Tours at the end of the season, and this year rode 20 race days before the season ground to a halt due to the COVID-19 pandemic. He was set to target the rescheduled September Tour and the October cobbled Classics upon racing's restart, though participation in the Grand Boucle now looks unlikely.

Recovery is going well📈Really happy I could start rehabilitation process with treatments and exercises by the physiotherapist under supervision of the team.Thanks to the good recovery I was able to do my first bike rides😃Not smooth or fast,that’s still a very long way to go,but the first steps have been taken. Niki Terpstra Racing