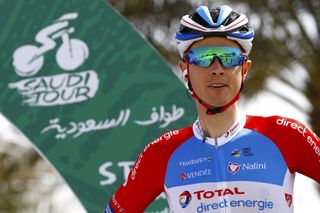 As reported at the weekend, Total Direct Energie's Niki Terpstra has been able to return home from hospital following his training crash in the Netherlands a week ago. On Tuesday, the Dutchman took to social media to thanks fans and well-wishers for their "overwhelming" messages of support since his accident, which left him with concussion, a collapsed lung, and a fractured collarbone and ribs.

"It's been a week since my nasty training accident," Terpstra wrote on Twitter. "Thanks to the timely assistance on the spot and the great care in hospital, the first steps in recovery have gone well. I was able to return home on Sunday to recover in my own environment.

"The support I've had has been overwhelming; thank you to everyone for their encouragement. It's going to be a big motivation in my rehabilitation," he wrote.

That rehabilitation time is likely to be 10-12 weeks, according to Total Direct Energie team doctor Hubert Long, who said that Terpstra had lost consciousness following the crash, when he hit a rock while motorpacing behind a scooter after swerving to miss some geese. He was transported to hospital by helicopter and put into intensive care.

It was the third serious crash for Terpstra in a little over a year. The 36-year-old crashed out of the 2019 Tour of Flanders while defending his title at the Belgian Classic, and was left with severe concussion. After returning to competition five weeks later at the 4 Jours de Dunkerque last May, Terpstra then crashed on stage 11 of last year's Tour de France, fracturing his shoulder, and was again out of competition for five weeks until his return to racing at August's Tour du Limousin.

Terpstra went on to finish second at Paris-Tours to Lotto Soudal's Jelle Wallays at the end of last season, and had ridden a full programme of races in 2020 before the season was cut short by the coronavirus pamdemic, with eighth place on the opening stage of the Saudi Tour in February and 33rd place at the Omloop Het Nieuwsblad at the end of the month, ahead of riding Paris-Nice.

Thanks for the support everybody! pic.twitter.com/F0FfcO8KLLJune 23, 2020