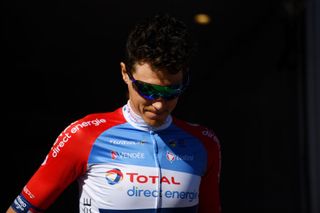 The former Paris-Roubaix and Tour of Flanders winner was airlifted to hospital after falling heavily and losing consciousness while motorpacing in the Netherlands on Tuesday.

He was admitted to intensive care and diagnosed with a head trauma, a broken collarbone, a collapsed lung, and a back contusion.

On Sunday, he had recovered to such an extent as to be able to leave hospital and return home.

"We kindly ask everyone to give our Champ and his family all the rest and privacy they need the coming period."

Doctors at Total Direct Energie have already predicted that Terpstra will need between 10 and 12 weeks to recover from his injuries, which would rule him out of the rescheduled Tour de France beginning on August 29.

The crash is the latest in a series of setbacks for Terpstra since he joined the French second-division team in 2019 after winning Flanders with Deceuninck-QuickStep in 2018. He crashed out of the 2019 Flanders with severe concussion and was later forced to abandon the Tour de France with a fractured scapula.

If he's unable to ride the Tour de France, Terpstra should be able to return in time for the cobbled Classics, which will now take place in October. He also has transfer talks to complete, with his two-year contract at Total Direct Energie expiring at the end of the year.