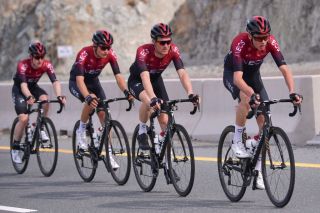 Team Ineos has helped provide NHS staff in the United Kingdom with hand sanitizer after their owner Jim Ratcliffe converted three of his plants into producers of the product. The move was made in response to a ‘call to arms’ from the UK government with the growing coronavirus pandemic forcing countries around the world into various levels of lockdown.

With racing suspended across all of Europe the Team Ineos logistics team were used to help with the delivery of the hand sanitizer products, as the petroleum company looks to roll out, "up to a million bottles of INEOS' new hand sanitizer."

Ineos, who courted criticism in 2019 due to their fracking activities, entered cycling in 2019, when they took over the team sponsorship from Sky.

In a statement released by Team Ineos on Friday, those products are now being sent to several NHS Trust hospitals in the north of England with 28 locations in total set to benefit.

The statement added that, "Ineos is now producing almost 200 different products that are being used in drugs, testing kits, ventilators and protective clothing in the fight against the Coronavirus."

Dave Brailsford, who has been helping with the distribution of the hand sanitizer added: "The British government asked industry to help and INEOS was proud to answer the call. Team INEOS is used to moving at speed but ten days from start to finish for three plants already was incredibly tight. We are all in this together and I am grateful to everyone in the entire INEOS family for their hands-on approach to getting the job done."

Team Ineos are not the first brand to help in such a manner. The Italian clothing manufacturer, Santini, who are based in one of the worst-hit coronavirus areas, switched their production last month and began making face masks for medical teams. Several other clothing brands have taken similar positions, while individual riders have also played a highly commendable part.

Davide Martinelli volunteered as a bike courier in his local village and helped by delivering vital medicines to those too vulnerable or unable to leave home. Elise Chabbey from Katusha Bigla is working on the frontline after completing her medical degree. She is currently based in a Geneva hospital.