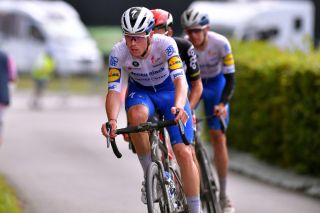 Deceuninck-QuickStep have been left without the services of powerful Czech rider Zdenek Stybar for this year's Tour de France, which starts in Nice on Saturday. They will, however, be able to count on the in-form Rémi Cavagna, with the French rider stepping in as a late replacement for Stybar, who is suffering from a knee-tendon injury.

Following the announcement by the team on social media, it was Cavagna who stepped up on stage for the Tour teams presentation in Nice on Thursday evening, and who will now ride in the service of team leader Julian Alaphilippe and sprinter Sam Bennett.

"Unfortunately, Zdenek Stybar has had to withdraw from this year's Tour de France with a knee-tendon injury," the Belgian WorldTour team reported. "He will be replaced on the start line in Nice by Rémi Cavagna. We wish Zdenek a speedy recovery."

The 25-year-old raced at both the Tour de l'Ain and the Critérium du Dauphiné following the resumption of competition after the sport's shutdown due to the coronavirus pandemic, and last week became French time trial champion and took silver at the European Championships time trial – behind Switzerland's Stefan Küng – three days later.

He then made it into the day's main, six-man breakaway at the Bretagne Classic-Ouest France on Tuesday, and pushed on alone for almost 40 kilometres before eventually being reeled in by the peloton. On current form, Cavagna was perhaps a little unlucky not to have been named in Deceuninck-QuickStep's eight-rider squad in the first place, but will now be able to make his Tour de France debut.

"Starting the Tour has been something that I've wanted to do for some time, and when I was told I wouldn't be going, I was obviously disappointed," Cavagna admitted to French newspaper La Montagne last month. "But I know I will get there some day. It's not like this is my final year as a professional; I still have a few good seasons ahead of me."

Cavagna was set to target the time trial stages at the rescheduled Giro d'Italia in October, and it remains to be seen whether that will still be a goal. The Tour will be the third Grand Tour of the Frenchman's career, and allows him to complete the 'set', having also ridden last year's Vuelta a España, while he rode the Giro in 2018.

Unfortunately, @zdenekstybar has had to withdraw from this year’s @LeTour with a knee tendon injury. He will be replaced on the start line in Nice by @remicav. We wish Zdenek a speedy recovery! pic.twitter.com/L6j3Rx7tpmAugust 26, 2020