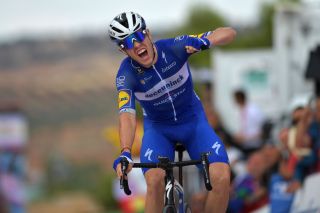 Deceuninck-QuickStep's Remi Cavagna has told the French press that he won't make his Tour de France debut this year, but that he will ride the Giro d'Italia, with a goal of targeting the time trials and helping Grand Tour debutant Remco Evenepoel.

"I'm not going to do the Tour de France, although I am one of the reserves," the 24-year-old told French newspaper La Montagne at the weekend from the team's training camp in the Italian Dolomites.

"Starting the Tour has been something that I've wanted to do for some time, and when I was told I wouldn't be going, I was obviously disappointed," Cavagna admitted. "But I know I will get there some day. It's not like this is my final year as a professional; I still have a few good seasons ahead of me."

Cavagna also admitted that the route of this year's Giro – rescheduled for October 3-25 – suits him better as a rouleur, and that he'll now target the three individual time-trial stages at the Italian Grand Tour, as well as do what he can to help 20-year-old teammate Remco Evenepoel, who will be attempting a high finish on the final general classification.

Cavagna: This year I progressed a lot

"Young Remco is going to see what he can do for his first Grand Tour," said Cavagna. "I'll try to help him, and then try to save some energy on the very hardest stages in order to target my goals: to slip into breakaways and to try to get some good results in the time trials."

Cavagna made his own Grand Tour debut at the 2018 Giro, and then also rode last year's Vuelta a España, where he won stage 19 to Toledo – a road stage – and finished third in two others, including the individual time trial on stage 10.

He then continued his run of good results at the start of the shortened 2020 season, winning the Ardèche Classic in late February ahead of the halt of competition due to the coronavirus pandemic.

The two-time French under-23 time trial champion – who also won a stage at last year's Tour of California – added that he sees the Giro as a good opportunity to continue to show what he can do against the clock, and to try to win another Grand Tour stage, and in turn try to prove that he deserves a place on Deceuninck-QuickStep's squad for next year's Tour de France.

Deceuninck-QuickStep's squad for the 2020 Tour de France (August 29-Septmeber 20) is yet to be announced.