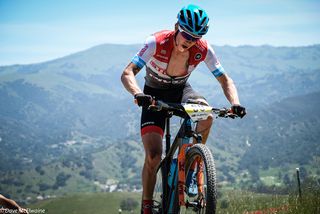 With no professional racing of any kind on the books until at least August, some top cyclists are finding a diversion in the ficticious 'Everesting' challenge - doing enough repeats on one climb to climb the equivalent of the height of Mount Everest, 8,848 metres. US cross country champion Keegan Swenson set the unofficial record on Friday in Utah. Cyclingnews spoke to the Olympic hopeful to get the details behind his effort.

Normally at this time of year, Swenson, who won the elite title in cross country at the USA Cycling Mountain Bike National Championships last year, would be returning from a block of World Cup racing in Europe. With the calendar suspended, he's had to revert to endurance training before he plans to ramp up for the expected fall World Cups where he aims to automatically qualify for the rescheduled Olympic Games in 2021. So the timing of an endurance challenge was perfect: he had a tough climb, a safe road - Pine Canyon Road was closed to traffic for the winter - and a history of 'gnarly' rides.

The Everesting challenge was an idea partly out of boredom since the COVID-19 pandemic has halted all racing and partly to help his friend Ryan Standish raise money for the Multiple Sclerosis society.

Swenson tells Cyclingnews that the fastest time he could find was just under nine hours and he had a longer segment picked out at first. But once former road pro Phil Gaimon posted his Everesting time of 7:52:12 last week, he had to change his strategy.

"There was still a little snow at the top so I couldn't go all the way up so I thought I'd go most of the way up the climb - it was going to be about a 30-minute effort and about 12 reps on the route I had planned," Swenson says. "I was planning for about eight and a half hours - it was going to be hard, but do-able. And then Phil Gaimon went and did his attempt and really upped the game. If I want to go for the record, I'm going to have to put a lot more thought into the route and really go for it.

"Phil did something like 70 repetitions [60 -ed] and to me that just sounds absolutely awful. I wanted to keep it between 20 and 30. Whether that's faster or not, I wasn't sure. I just know I didn't want to do more than 30 reps. I figured out from the gate to the first switchback was going to be 29 reps, and I figured that would go well. I ran it by my buddy at TrainerRoad because they're all huge data nerds, and he said it looked like a perfect segment because it averaged close to 11 per cent, and for the descent there was only one turn I had to touch my brakes in - it was about 50mph all the way down and good pavement. Once you end up doing too many reps, you start wasting too much time turning around."

For pacing, Swenson picked an effort level similar to what he did for White Rim which turned out to be a VAM of between 1,300 and 1,400 vertical metres per hour - about the pace of the Tour de France peloton in the high mountains - and was remarkably consistent. He averaged 1,363m/hour give or take 32m and topped it off with the last climb at 1,478m/hour.

"At first it felt almost too easy and I didn't know if it was hard enough, but I was on pace - I knew I had to do about 16-minute laps, that's about 14 minutes up and two and change going down. I knew what I had to do to break the record so I thought, I'll just keep doing this until halfway - and if I'm still feeling good I can turn it up a little bit. It turned out the pace was about right and I didn't have a whole lot left at the end. I was able to knock off like 40 seconds or so the last two laps and that was pretty much all I had."

Swenson's aggressive pacing strategy didn't allow for even one stop, and he carried the absolute minimum on the climb - a partly full bottle, some cookies or doughnut holes - taking on about 90g of carbohydrates per hour between the gels and food.

"It's quite a bit, but I that's about what I train with on a hard day. So I figured I could handle that for eight hours. I felt good and my energy levels felt good most of the day. So I think it was a pretty good strategy and I didn't really have any stomach issues."

George Mallory, the grandson of the Britain who made the first attempt to climb Mt. Everest, was the first to take on the challenge of cycling up the same climb until reaching 8848 vertical metres of climbing in 1994 on Mount Donna Buang in Australia.

The Melbourne-based HELLS 500 club formed in 2014 to track and record Everesting attempts on the Everesting.cc website.

There are only a few rules: the climbing must be achieved on one activity - all rests included - and be uploaded to Strava - and on one climb.

Because the climb kicked up to almost 20 per cent gradient in parts, Swenson used small gears - running Shimano Dura-Ace 50-34 compact chainrings and an 11-32 cogset.

"I think it's important for anyone, no matter what Everest you're doing, you have to have the right gear ratios and be able to hold a decent cadence all the way up. That's more important than any weight or anything else," he says.

Two days after his mammoth effort, Swenson doesn't want to think about having to do it again but he admits he might be inclined to try if someone breaks his record. But he's enjoyed the challenge and helping Standish raise more money for MS.

"I think the cool thing about Everesting is that like anyone can do it anymore in the world on really any climb and they can do it at any pace that they want and I think that's kind of coolest thing. If they take 24 hours to do it, that's that's amazing that they're out there all day and they're suffering just as much. I think it's kind of cool - it just connects everyone who tries to do it and attempted to finish it."