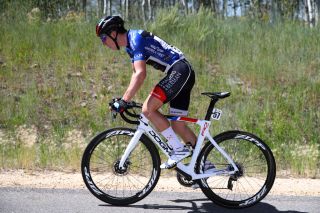 Hagens Berman Axeon's Kevin Vermaerke completed an outdoor 'Everest Challenge' in Orange County, California, on Thursday, recording a time of 8:19:26 to climb just over the height of Mount Everest – 8,848 metres – and afterwards called it "one of the hardest things I have ever done".

The 19-year-old is one of a number of elite riders to have taken on an Everest Challenge in recent weeks. Trek-Segafredo's Giulio Ciccone completed the feat indoors on his home trainer on the Zwift training platform in April, and Bahrain McLaren's Mark Cavendish and Team Ineos' Luke Rowe did the same earlier this month. Bora-Hansgrohe's Emanuel Buchmann – who finished fourth at last year's Tour de France – is also set to take on the challenge, outside, in Germany later this month.

Some speculated ahead of his attempt whether Vermaerke might be able to beat retired pro rider Phil Gaimon's unofficial record of 7:52:12 – set just on Monday, in the Topanga State Park, near Los Angeles – for the exact 8,848 vertical metres that make up the famous Himalayan mountain. Vermaerke went close enough – and it would appear that he may have set the second-fastest recorded time – but it didn't sound much like he was looking to make another attempt any time soon.

"My definition of hard has been redefined," he captioned the stats from his ride on Strava. Vermaerke climbed 8,859.6 metres (29,067 feet) in 8:19:26, repeatedly climbing and descending a section of Ridgeline Road, near Lake Forest in Southern California, covering 156.3km (97.13 miles), with an average power output of 262 watts and burning 8,763 calories.

"Done," Vermaerke wrote on Twitter on Thursday evening. "Thanks to everyone who followed along on my journey today. That was one of the hardest things I have ever done.

"Also, that was enough climbing for a while. I think I'll ask Axel Merckx, Jeff Louder and Koos Moerenhout if I can only do flat races from now on," he added, referring to his sports directors at Hagens Berman Axeon.

"You proved you can climb all day long," he wrote. "Only hilly races for you from now on!"