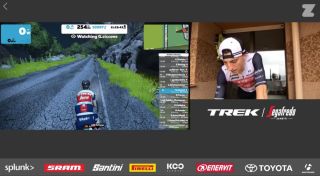 Giulio Ciccone is the latest professional rider to complete an extreme ride on a home trainer during the COVID-19 coronavirus pandemic, riding for over 11 hours to complete an Everest Challenge on the Zwift platform.

The Trek-Segafredo rider won the king of the mountains jersey at the 2019 Giro d'Italia and wore the yellow jersey for two days at the Tour de France but admitted he had never felt so tired after a day in the saddle.

"I was cooked, completely empty!" Ciccone told La Gazzetta dello Sport after his ride. "I can't even remember exactly how long I rode. I lost 2.1kg and consumed about 9,000 calories. I'd promised myself two pizzas if I finished but was so tired I could only eat one. The ride gradually wore me down, hour after hour. I've never felt as bad, even after cracking in a race in the cold and rain."

Ciccone is the latest rider to complete an extreme ride during the COVID-19 lockdown. Last week, Geraint Thomas completed three back to back 12-hour shifts on the bike to raise funds for the British National Health Service. South African Willie Smit of Burgos-BH rode none-stop for 1000km and 37 hours.

Ciccone sees only benefits in Nibali's arrival at Trek-Segafredo

Ciccone, who last month offered two Tour de France yellow jerseys to raise money for a local hospital to buy a respirator, rode for 11 hours and 19 minutes, covering 254 virtual kilometres and climbing 10,397 metres – a little over ten times up the Alpe du Zwift climb. He rode alone on the terrace of his apartment in Monaco, with fellow Italian Emanuele Onesti who rides for the Giotti Victoria Continental team, also completing the Everest Challenge from his own home.

"I wasn't something we'd really planned, two days before, I said: 'Lets do it' and with the team we planned everything." Trek-Segafredo sent Ciccone extra supplies of Enervit gels and bars and he loaded a small table next to his bike with bidons, food, clean jerseys and chamois cream.

"Everesting was something I'd wanted to try to do but I'd thought about doing out on the road, perhaps on the BlockHaus climb (near Ciccone's home in the Abruzzo region of Italy)," he explained.

"I'd never thought about doing on the home trainer because it's probably twice as tiring. The Everest Challenge is about climbing at least 8,848m on the same climb but I decided to ride on and do 10,000m, then I also decided to finish the climb one last time. I love long endurance rides, I like suffering for a long time."

Despite his successful Everest Challenge, Ciccone admitted he couldn't wait to get back out on the road for a real training ride. Cycling is banned in Monaco, like in France, Italy and Spain, while racing is unlikely to start until August at the earliest.

"I hope we can get back on the road in May, otherwise it's going to be difficult, if not impossible to take," Ciccone admitted.

"I've lost track of how long I haven't ridden outside, it must be close to two months, that's mentally tough. Our routines have changed and now we rarely go out. Fortunately the home trainer helps to do some quality workouts but at the same time it wears you down."