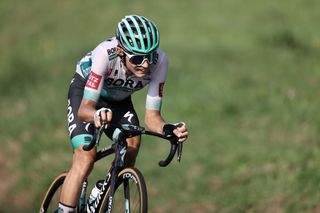 If Tuesday’s stage winner Lennard Kämna had one thought uppermost in his mind as he hauled himself up the second-to-last climb of the day close behind a charging Richard Carapaz (Ineos Grenadiers), it was almost certainly “not in a sprint, not in a sprint.”

It wasn’t just that Kämna’s biggest previous professional win, a stage of the Critérium du Dauphiné last month, had come thanks to a solo breakaway. Or that the Bora-Hansgrohe pro had been outduelled in the summit finish to Puy Mary last Friday by Dani Martinez (EF Pro Cycling) when he and teammate Max Schachmann had initially outnumbered the Colombian on the climb by two to one.

Three years ago, too, Kämna lost another major battle in a two-man dash for the line, that time  in the Under-23 World Championship Road Race in Norway to France’s Benoit Cosnefroy (AG2R La Mondiale), who clearly had the better of him.

Bora-Hansgrohe outmanoeuvred but optimistic at the Tour de France

So after being the only rider able to follow Carapaz up the road as the Ecuadorian’s multiple attacks ripped the leading break to pieces on the first category climb of Montée-de-Saint-Nicolas-du Moucherotte, Kämna confirmed later he was watching and waiting for the right moment to go clear by himself.

“I knew I had to make it alone, I absolutely didn’t want to make it to the line for a sprint like the one I had with Martínez,” Kämna said, referring to stage 13. “So as soon as I got a gap, I went for it without thinking about it at all.

“When I was on Carapaz’s wheel and he was dropping people, I knew it wouldn’t be easy. But then he didn’t look quite so good near the summit, and I thought 'now is when I have to do it’."

Having opened up his gap over the top of the climb, Kämna rapidly increased his margin on the 2019 Giro d’Italia winner to the point where he had 1:15 with two kilometres to go and just one obstacle, the third-category Côte 2000 in Villards-de-Lans left between him and victory.

“I thought I’d be faster than him on the small descents and on the flats that followed the climb,” Kämna said, “and that’s what happened.”

For Bora-Hansgrohe Kämna’s win was timely, to say the least, as the team has had multiple, fruitless breakaway bids, a misfired GC goal with Emanuel Buchmann, fourth overall last year, and a fight for an eighth green jersey with Peter Sagan stutter badly.

“It absolutely is a big relief,” the 24-year-old confirmed. “We’ve been in the breaks a lot, but there’ve always been small setbacks. Then last week we all started feeling better and better.

“I was so disappointed after my second place last week, but I told myself to keep working, and today I had really good legs and went for it full gas. But I knew, too, I had to try to win alone.”