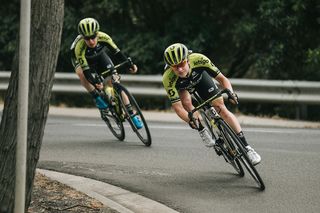 By instigating the early breakaway during the elite women's road race at the 2020 Australian Road Championships in Buninyong on Sunday, Mitchelton-Scott ensured that their rivals were placed on the defensive, and unable to reel in the three-rider move made up of Grace Brown, eventual winner Amanda Spratt and Justine Barrow (Roxsolt Attaquer), who rode strongly in the company of the two Mitchelton teammates to take the silver medal.

"We wanted a hard race, and we wanted to put pressure on early," explained Mitchelton-Scott sports director Martin Vestby on the team's website after the race. "We tried to surprise at least some riders, and that worked out well.

"When they started to panic at the back, it wasn't organised, and for us that was perfect," he said.

"We might have expected Lucy [Kennedy] to have been at the front for us," Vestby continued, "but Grace was there, and she had a great day, and did most of the work to get the gap we needed, and then 'Spratty' pulled it off."

For Brown, who took the silver medal in the elite women's time trial on Wednesday, it was a case of giving it everything throughout the race, first in service of Spratt in the break, and then to ensure she got a medal – of any colour – after having been dropped.

"It was our plan to hit it pretty hard on that third lap," she said of establishing the breakaway. "Originally, we were just expecting a split in the bunch, but Spratty was on my wheel and she said, 'This is good, Grace – it's just you and me.' Then Justine bridged across and we were in a really good position.

"I worked pretty hard in that group to keep extending the lead, and Spratty did the job, thankfully.

"I did have an image of Michael Freiberg in my head," admitted Brown of her thoughts Ince she was dropped, remembering the 2019 men's road race winner, who caught the leading duo in the closing stages of last year's race before attacking and taking the title.

"I kept pushing after those last two climbs, but by the time I got to the one-kilometre-to-go banner, I knew I was too far behind," she said, settling for bronze.

As for new road race champion Spratt, she said that it was a win she owed to her team, and Brown, in particular.

"When Grace attacked on the climb, that was part of the plan to open the race up really early," said Spratt. "She was so strong, and only I could follow before Justine came across.

"I don't know if anyone 'allowed' us to get away so early, but we didn't think anyone would expect such an early break. We had a really good group, with an incredible ride by Justine, who helped keep it going.

"Grace did so much work. It's unusual to have come here as the sole leader of the team," Spratt said, revealing what the team's plan had been all along, "so I was under a lot of pressure, but I'm so proud of my team to have been able to help me pull it off, and so, so happy."