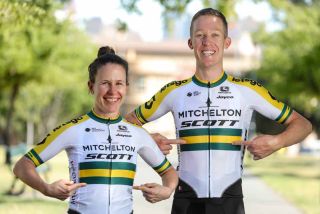 The Mitchelton-Scott duo of Cameron Meyer and Amanda Spratt have unveiled the national champion's jerseys that they'll wear throughout 2020, starting with the Tour Down Under.

The pair won the elite men's and women's national road race titles at the weekend, Meyer for the first time in his career, Spratt for the third.

Having both pulled on a plain 'green and gold' national champion's jersey for the podium ceremony, Mitchelton-Scott have now produced trade team versions, complete with sponsor logos.

The team's standard jersey is black and yellow but Meyer's and Spratt's jerseys are white, with gold sleeves and horizontal green and gold bands across the chest.

"I got the kit already after the race on Sunday and tried it on. I didn't ride yesterday so I was disappointed and tried it on again, and today I finally got to wear it out training," said Spratt.

"I’ve been national champion twice before but it’s not getting boring or old, in fact it’s even more special. The older you get, you realise that victories are harder to come by and I appreciate these moments even more now and I can't wait to race."

Meyer, who was tearful on the podium after a long quest to land the national title, said: "I don't think it's sunk in yet. 12 years was a long time to wait so it's going to take a little bit longer to sink in. I think I will have to get out there racing, for people to see me racing in the jersey with a home crowd and then it'll sink in."

Both Spratt and Meyer will debut the new kit at the Tour Down Under. The four-stage women's race begins on Thursday, while the six-stage men's race gets underway next Tuesday.

Meyer, who won the Tour Down Under in 2011, lines up as part of a strong Mitchelton-Scott outfit that features Daryl Impey, winner of the past two editions, and Simon Yates, winner of the 2018 Vuelta a España. Luke Durbridge, the recently-crowned Australian time trial champion, is also present, along with Jack Bauer, Lucas Hamilton, and Michael Hepburn.

"It means a lot to wear the jersey here. The Tour Down Under has a big history with me as well, winning it in 2011. I love coming back to this race, and the whole Australian summer of cycling, so to wear this jersey in the months of January and February here in Australia is amazing," Meyer said.

"The final Sunday will be pretty amazing. It will be very cool to go up Willunga on Australia Day with the jersey and hopefully we've got an ochre jersey in the team as well which would make it even more special.

"We want to start the season well and I think bringing Simon Yates out will bring an added dimension to our team with the two hill-top finishes that we might not have had in the past. Then we've also got Daryl Impey who can do anything in Australia in January. He is the two-time defending champ and I'm sure he will be looking for his third and we've got a super strong squad to support him."

As for Spratt, the 32-year-old will be chasing her fourth straight Tour Down Under title, though the absence of a major climb makes the 2020 route less favourable to her.

She lines up as part of a Mitchelton-Scott line-up that also includes Grace Brown, who was third at nationals, and Lucy Kennedy.

"We have shown already, especially at nationals, that we have a really strong team. Grace was really strong, Lucy is going well too, she was behind at the nationals being a pest which was great for us. We have three really strong riders on the team and I can't see any other teams that have three strong cards like ours, so it's going to be a numbers game," said Spratt.

"You can't just look at one point on the course and think that's where it's going to be won. It's a dynamic course, but we rode stages two and three today so we know that they are both tough, that there are plenty of opportunities and we want a hard race regardless."