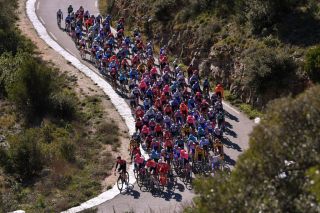 The UCI has delayed a widely expected announcement of the dates for a revised autumn men's and women's race calendar after a decision by France to ban major sporting events until September and doubts about the limitations of different COVID-19 lockdowns across Europe further complicated hopes for a return to racing in late summer. The UCI announcement is now anticipated on May 5.

Some major WorldTour events, including Strade Bianche and Milan-San Remo, were expected to return in August, with most national road race championships scheduled for August 22-23. There was also expected to be a shortened Critérium du Dauphiné before the rescheduled Tour de France pencilled in for August 29-September 20. The Giro d'Italia and Vuelta a España were due to follow on from the Tour de France in October, with the major Classics such the Tour of Flanders and Paris-Roubaix held at the same time.

The Women's WorldTour calendar was expected to continue from September through November with a reschedule of all major one-day races, and organisers of the Giro Rosa had requested a new date of September 5-13, during the second week of the Tour de France.

However decisions by different countries and governments are reducing the chances that major sporting events will be held in 2020, with cycling also affected.

The UCI cancelled a meeting with key stakeholders last week after a series of leaks to the media but indicated race dates would be confirmed following a meeting today.

The sport governing body announced on Wednesday, however, that it has opted to take more time to work on the men's and women's race calendars, with any announcement being pushed back until May 5.

"The Union Cycliste Internationale (UCI) today united the families of men’s and women’s professional road cycling - organisers (AIOCC), teams (AIGCP and UNIO) and riders (CPA and CPA Women), as well as Marianne Vos as member of the UCI Athletes’ Commission and riders’ representative on the UCI Road Commission – with a view to the resumption of the 2020 cycling season in the context of the coronavirus pandemic," read the UCI's press statement on Wednesday.

"It was decided that the publication of the revised calendars for the 2020 UCI WorldTour and UCI Women’s WorldTour, initially planned today in the interests of stakeholders, would be postponed to the beginning of next week.

"Indeed, the UCI and its partners need to pursue their work as certain points remain unclear due to the world health situation. The measures recently taken by some European governments concerning the restriction of mass sporting events must, as our Federation once again recently underlined, be taken into consideration when establishing the UCI International Calendar for the recommencement of cycling competitions.

"The UCI and cycling’s families aim to publish these calendars on Tuesday, 5 May, after the meeting of the Professional Cycling Council (PCC), responsible for the UCI WorldTour calendar. The UCI clarifies that the PCC meeting scheduled for today was postponed due to the latest developments."

In addition to announcing the revised calendars next week, the UCI will also confirm rules concerning team participation, rules concerning the number of riders per team at the start of races, and the establishment of a steering group with the aim of defining the conduct to be adopted, in particular concerning health, when the season gets underway again.

UCI president David Lappartient is reportedly continuing to talk to the different stakeholders of the sport – teams, riders and race organisers – but has realised the sport's governing body must better understand the impact of COVID-19 restrictions in different nations and especially across Europe before announcing possible race dates.

According to Belgian newspaper Het Nieuwsblad, the views of UCI Medical Director Xavier Bigard have a huge sway on the possibility of races going ahead on the proposed August and September dates.

It seems the decisions by different European countries to slow their easing of lockdown measures and stop all major sporting events, even in September, will have a knock-on effect on the revision of the race calendars.

The new dates of the Tour de France were confirmed in mid-April to help offer hope to riders and sponsors but questions about how racing can go ahead while the risks of COVID-19 remain where never answered. Further changes to the calendar would lead to more confusion and only intensify the power struggle between rival race organisers.

La Gazzetta dello Sport, which owns the Giro d'Italia and is part of the same RCS Media Group as the race organisers, suggested it would be impossible to move the Tour de France again, warning: "If the Tour de France doesn't start on August 29, it will be cancelled."

The French national championships, which were rescheduled for the week before the August 29 Grand Depart face cancellation in light of Tuesday's French government announcement, with the mayor of host town Plumelec telling Ouest France that the event could not go ahead. The organisation of the Bretagne Classic in Plouay, currently scheduled for August 25, expressed hope that their event could precede despite the restrictions on public gatherings, albeit with the crowd at the finish limited to 3,000 paying spectators.

In Germany, meanwhile, the organisers of the national championships in Stuttgart announced on Wednesday that the event will not take place in August due to the coronavirus pandemic. The event has instead been postponed to June 2021, with the original 2021 host Winterberg now set to host the 2022 championships.