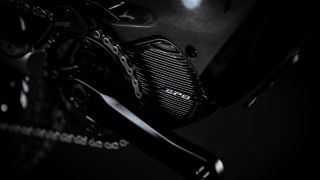 Merida has launched an upgraded range of its eMTBs, giving us insight to Shimano’s latest EP8 pedal-assist drivetrain development. A system which Shimano says will be rolled out across a range of disciplines from mountain biking to city commuting.

The eONE-SIXTY is a range of long-travel e-mountain bikes, which run different sized wheels diameters and a blended frame construction. They feature a carbon-fibre front triangle and aluminium rear, with the really interesting bits in its downtube and bottom bracket area. Merida has upgraded from an E8000 specification to Shimano’s latest EP8 system, with an impressive new array of features and statistics.

The EP8’s more potent battery chemistry allows for a slighter overall drive system size too. It is 10% smaller than Shimano’s E8000 system and 300g lighter, thanks to a magnesium drive case design.

Beyond the potential gain in range, electric motor assistance power is up by 15 units to a new peak of 85Nm.

Thermal management can be an issue with e-bikes, especially when ridden in steep terrain, during sweltering conditions. Delivering improved cooling to Shimano’s new EP8 motor is more pronounced fin surfacing, which assists with heat dissipation.

Shimano’s engineers and software experts have also calibrated the EP8 system to use its increased power in a linear way, when you are riding, preventing those annoying power surges.

The EP8's mechanical friction has also been reduced by 36%, compared to the E8000 system, which should make for even more seamless engagement and disengagement of the pedal-assist function.