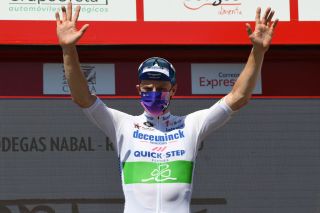 A late attack rather than a sprint netted fast man Sam Bennett (Deceuninck-Quick Step) a fine first win in cycling’s re-start to the season at the Vuelta a Burgos on Friday.

Already well-positioned in the finale, the Irishman reacted just a few fractions of a second faster than the rest of the bunch when there was a brief hesitation caused by a crash with a kilometre to go, and he pulled clear on the slight uphill that followed.

Bennett then had the strength and endurance to keep clear of a chase group on the draggy little climb that preceded the fast descent onto the finishing straight, and he won with a respectable amount of daylight between himself and Arnaud Demare (Groupama-FDJ) and Giacomo Nizzolo (NTT ProCycling).

Combining all those pieces at exactly the right time was by no means straightforward, but the Irish champion’s resourcefulness earned him his third win of the season, six months after he claimed the Torquay Classic and a stage of the Santos Tour Down Under this January.

“It was a hot, hard final, and unfortunately Michael [Morkov, leadout man] crashed but the whole team did a fantastic job and I went into that last corner right where I wanted to be,” Bennett said afterwards.

“Then I took a look round to see who was there right after the crash, and everyone paused so I decided to go.”

Bennett had, like the rest of the peloton, already been over the little finishing climb when the peloton went through the finish with around 35 kilometres to go on stage four, but it felt rather tougher the second time around.

“It took a lot longer than I remembered and it hurt a lot,” Bennett said. “But I was so glad to take that win, I really needed it.”

Bennett finished third on Wednesday’s more straightforward state two, but he had already won on similar rollercoaster finale in Oviedo last year on the Vuelta a España, and he agreed that the final winding ascent could have suited him.

“Sometimes a little climb like that can benefit me, I don’t enjoy them, but I often win on those kinds of finales, so maybe they’re ok for me,” he reflected.

For Deceuninck-Quick Step, Bennett’s win was their second in 24 hours at the Vuelta a Burgos, and with Remco Evenepoel still in the overall lead, things are set up perfectly for the team ahead of Saturday’s final stage, which will be a showdown at the Lagunas de Neila summit finish.

Bennett had words of praise, too, for the Vuelta a Burgos itself, which boasts a deep field this year as the first major event on the calendar since competition resumed following a long hiatus.

“It’s a really nice event, and they’ve done a fantastic job,” Bennett said. “I hope cycling is back here to stay this time.”