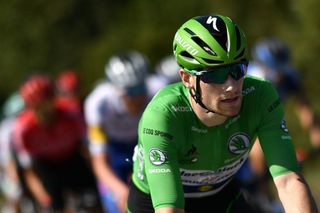 Bunch sprints at the Tour de France go by in a flash, but they endure in the memory, especially for the beaten men. In the opening phase of this race, Sam Bennett's near misses – fourth in Nice on stage 1, second in Sisteron on stage 3, third in Privas on stage 5– were beginning to weigh on his mind.

When the Irish champion flipped out the light in his hotel room each night, he found himself staring at the ceiling, replaying the opportunities missed and totting up the chances left. The pressure didn't abate even when Bennett won at Île de Ré on stage 10. It simply changed form.

After ensuring that he continued Deceuninck-QuickStep's remarkable track record of sprint wins at the Tour de France, Bennett thrust himself definitively into the battle for a green jersey that had largely been the personal property of his former teammate Peter Sagan (Bora-Hansgrohe) since 2012.

"In the first week of the Tour, I was only falling asleep at 2 or 3 a.m. so it was definitely a relief when I got the win," Bennett told reporters in a Zoom call on Monday's second rest day. "But now I've found myself in a whole new position, with a different kind of pressure. But I feel like I'm coping with it OK now. You somehow get used to it because it's there all the time. It's two weeks now so it's starting to become more normal."

With six stages remaining, Bennett has a lead of 45 points over Sagan, wide enough to foster hope yet tight enough to ward off complacency ahead of a mountainous final week. Sagan has won seven green jerseys in eight years, largely thanks to his ability to pick up points in the parts of the race that the other sprinters can't reach.

These old certainties seem to be evading his grasp this year. At Lavaur and Lyon, for instance, the Slovakian squandered opportunities to amass maximum points after his Bora-Hansgrohe team had managed to shed Bennett from the peloton on his behalf.

"It's a nice lead at the minute but it can go down very, very quick. Peter is one of the best in the world so it's not going to be easy," said Bennett, who is prepared to forgo more stage wins in his quest for the green jersey.

"It seems like there's a really big opportunity this year. I've sacrificed some stage wins already, I think, and I probably will again in the later stages of this race, but it'll be to try to take home this green jersey."

Only outright disqualification – at Vittel in 2017 – has ever denied Sagan the maillot vert. Whatever happens, Bennett will be the first man to go the distance with him over three weeks in the points competition. With Bennett proving the quicker in the sprint, Sagan is compelled to try to knock the Irishman out of the equation by distancing him in the climbs, but the tactic is an exhausting one.

"Yesterday, I noticed there was a little bit of a dip when he was attacking. I think the day before [stage 14 to Lyon – ed.], where his team rode very hard to get rid of me on the climb, might have hurt them a little bit," Bennett said. "He seemed to be a bit more tired, but he's one of these guys with incredible strength and I'm sure he will recover really well. He'll be very, very hard to compete with in the next days."

Bora-Hansgrohe omitted Bennett from the Tour squad after Sagan arrived in 2017 and left him out of the Giro d'Italia last year in favour of Pascal Ackermann, which prompted his transfer to Deceuninck-QuickStep this past winter. Bennett gently dismissed the idea that he drew additional motivation from the prospect of denying his old team the spoils in Paris.

"I'll just be focusing on what I need to do," Bennett said. "I don't care about any other teams or riders. I want to win the green jersey and I'd just be proud to have that green jersey."

Bennett preferred to focus on the attention his efforts have garnered back home. In Carrick-on-Suir, signs have sprouted up bearing the legend 'Maillot for Sam,' a play on the famous mantra of the long-suffering fans of the Mayo Gaelic Football team, who have gone 69 years without winning the Sam Maguire Cup of All-Ireland champions. If Bennett were to carry green to Paris, he would bridge a 31-year gap to the fourth and final points classification triumph of Carrick-on-Suir's most famous citizen, Sean Kelly.

"I love the support, but it also brings pressure in the form of expectation," Bennett said. "It's new to me as well, but I'm enjoying it. I'm enjoying the moment."

The final week ahead

When Bennett claimed a hat-trick of wins on the 2018 Giro, he was able to dole out his efforts carefully across the three weeks, sparing himself as much as possible in the mountains and thus maintain his sharpness for the sprints. With the green jersey on his back, there is no such respite at this Tour.

The intermediate sprints in the forthcoming trifecta of Alpine stages all come before the day's main difficulties, but the terrain is still rugged enough in the opening kilometres to tempt Sagan into action early on. Vigilance will be the byword for Bennett in the first hour each day, before his thoughts turn to surviving to face the next one.

"It'll always be a fight, and it's not only the intermediate sprints," Bennett said. "You also have to make sure he [Sagan] doesn't go in a breakaway and you have to finish the stage after doing all that work. It's quite a workload on the body."

On his previous Tour appearances of 2015 and 2016, an injured Bennett barely had the chance to sample a bunch sprint. In the opening phase of this year's race, he learned that a mass finish in the Tour is unlike any other because of the sheer speed of the peloton on the run-in.

"You often find yourself with 5k to go with absolutely no legs and thinking you won't even make the final," Bennett said. "But you keep pushing. The guys who are doing their jobs with 5k to go end up coming backwards through the group, and then in the last k [kilometre], all of a sudden, you find yourself up the front. And then somehow the legs are there."

A thought to sustain him in the days ahead.