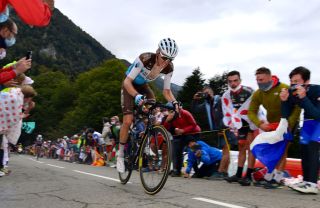 In the modern Tour de France, as Romain Bardet knows only too well, half a minute can seem like an eternity. The AG2R La Mondiale rider reached the first rest day in fourth place overall and just 30 seconds off the overall lead, but he downplayed his chances of divesting Primož Roglič (Jumbo-Visma) of the yellow jersey in the coming days.

“Thirty seconds, that’s enormous,” Bardet told reporters in a Zoom call on Monday afternoon. “Other than a miracle, taking back thirty seconds on Roglič…”

Bardet spoke from experience. He spent much of the 2017 Tour de France scarcely 20 seconds off Chris Froome, Team Sky at the time, but it was hard to shake off the feeling that he was being held at arm’s length by the strongest rider – and team – in the race. In the final time trial in Marseille, Bardet’s deficit duly ballooned to 2:20.

On the other hand, Bardet might benefit from considerably greater freedom of movement on this Tour de France than in 2017, when he set out from Düsseldorf as one of the pre-race favourites and was marked accordingly by Froome and Team Sky. After the disappointment of last year’s 15th place – “I don’t know if we can call it a failure, but it was a long way short of my hopes” – Bardet began the 2020 Tour unfettered by the same burden of expectation.

“I’m lucky not to be the rider he [Roglič] is watching the most,” Bardet acknowledged. “Of course, I don’t expect him to give me a lot of space, but he’s not going to jump on me either. It’s up to me to have the legs and to be still up there when there are only four or five riders left. But now, Roglič has the race well in hand.

"When I was 11 seconds down, there was a possibility, but I think I left my chance behind yesterday. For the jersey, it’s going to be complicated.”

The rescheduled 2020 Tour de France has been a novel kind of a race to this point. After the first summit finishes at Orcières-Merlette and Mont Aigoual failed to provoke major differences between the principal contenders, the racing was altogether less controlled in the Pyrenees, with the yellow jersey group splintered by accelerations atop the Col de Peyresourde on Saturday and again on the Col de Marie-Blanque 24 hours later. Bardet confirmed the impression that the pace had been exceedingly high at the head of the race in the Pyrenees.

“I think I’m participating in the highest level Tour of my career, the level is really impressive,” Bardet said. “I’m doing performances that I’ve never done in the past. I’m breaking records, so the form is very good, but the level is just ultra-high. All the top players are here, with only one or two exceptions. It’s really a race of a very high level and I like it when there’s a battle like that.”

While the reading on Bardet’s power meter suggests that he is exceeding his displays of 2016 and 2017, he accepts that his performance might not be rewarded with a similarly lofty position in Paris on September 20, such is the general level of this post-lockdown Tour.

“It’s being raced faster than before,” he said. “We’re breaking all the climbing records on every col we go up on this Tour, but you have to hang on, believe in yourself and you never know. You feel that teams are less strong than on the Dauphiné, so you need stay confident and optimistic.”

Outside of time bonuses, Bardet has yielded only 11 seconds to Roglič on the road on this Tour – all on Sunday’s stage to Laruns, where the Frenchman came home alongside Martin and Nairo Quintana (Team Arkea-Samsic) – but he conceded that the yellow jersey and his fellow Slovenian Pogačar are the two strongest riders in the race at this juncture. Bardet will need to be inventive if he is to claw back time in the days ahead.

“It’s up to me to try to ride differently because there are riders, especially Roglič and Pogačar, who are step above everyone else at the moment,” Bardet said. “We’ll see if that reality continues for the next two weeks, but for the moment, that’s how it is. Last year and the year before there were riders strong than me too, so you have to accept it, be realistic about your level and sure of what you can do.”

Bardet is riding in his final Tour in the colours of AG2R La Mondiale before he moves to Team Sunweb in 2021. The transfer seemed to have its genesis in the soul-searching that followed last year’s Tour disappointment and he had initially planned to skip the 2020 Grande Boucle altogether only for the coronavirus pandemic to force a revision of his plans.

Even then, Bardet initially spoke of targeting stage wins rather than the general classification and, unlike in recent years, AG2R’s Tour selection was not built exclusively around him. The team won a stage with Nans Peters on Saturday and holds the polka dot jersey with Benoît Cosnefroy, but manager Vincent Lavenu said that "everything is possible" for Bardet.

"When a rider has reached a certain level before, he is capable of reaching it again,” Lavenu said. “Romain has finished second and third, so we know he has that potential and capacity. There’s no reason why he can’t re-find his level.”