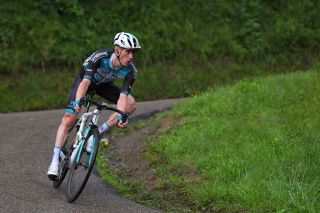 Pierre Rolland will miss his Vital Concept-B&B Hotels team’s forthcoming training camp in Oliva after he suffered a crash while training at home. The Frenchman fell on his face and briefly lost consciousness but said that his 2020 racing programme will not be affected.

“I was only two kilometres from home when it happened and I was able to alert my wife before briefly losing consciousness,” Rolland said, according to his team website.

“I have wounds that are going to take a few days to heal, so I’ll have to settle for some sessions on the home trainer and some physical work at home.”

Although Rolland will not travel to Spain with his team this week, he is still planning to start his season in late February.

“It’s annoying to miss the first team gathering of the 2020 season but this setback absolutely won’t change my programme,” Rolland said. “Together with the team staff, we had planned that I would start later than last year with the aim of having a single peak of form this season. Once I pin a race number on for the first time, ideally at the end of February, I’ll have a long build-up to be in top form for the summer races.”

Rolland and Vital Concept will hope to have an appointment at the Tour de France in July. The French Pro Continental squad missed out on an invitation to La Grande Boucle in its first two seasons of existence, despite signing Bryan Coquard in 2018 and adding Rolland in 2019.

Vital Concept were not among ASO’s four wildcard invitees to the past two Tours, and the race organiser has just two invitations at its disposal in 2020. Two of the four wildcards in 2019 have already automatically secured their Tour places for next year. Cofidis have been promoted to the WorldTour, while Total-Direct Energie have earned an automatic berth as 2019’s best ranked Pro Continental team.

After adding Nairo Quintana and Nacer Bouhanni to a roster that already includes Warren Barguil, Arkéa-Samsic will expect to earn a Tour invitation, while Vital Concept and Wanty-Groupe Gobert are among the teams battling for the other slot.