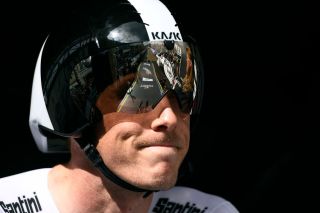 Rohan Dennis says that Team Ineos is his "dream team", following the announcement on Monday that the Australian will join the British WorldTour team in 2020.

Dennis quit mid-way through this year's Tour de France while racing for his new-for-2019 team Bahrain-Merida, but didn't race for the squad again after what had been an alleged disagreement over the team's equipment and clothing options.

For the following two months, Dennis training specifically for the World Championships time trial in Yorkshire in late September, culminating in a successful defence of the world title against the clock.

In mid-October, Team Ineos emerged as the favourites to sign the 29-year-old South Australian, despite interest from the likes of CCC Team, Movistar and Trek-Segafredo, and Dennis said in a video posted on his new team's website that's he's now raring to go for the new season.

"In a corny sort of way, it's been the dream team for me since about 2012, when I really felt like I could go professional," Dennis said. "It never happened with Sky back in the day, but now that it's Ineos – the same team – I'm really excited to start with the team."

Dennis alluded to his exacting demands when it comes to all things time trialling, clearly believing he's made the right choice with Team Ineos.

"There are always things I can improve on, and that's why I've picked Ineos because they're also willing to push me," he said.

"I like to push the teams I'm in to try to improve every little thing possible, without going too crazy, because sometimes you can get a little too over the top," Dennis admitted. "But I feel like it's something I bring to a team: 'Okay, this is great, but to stay on top, you've got to keep pushing to be better.'

"There's the technology side of things as well," he continued. "It's not just about being a bit of a fan of the team; it's about how precise the team has been over the years.

"They've got that track background and so we've got that similarity in that sense," said Dennis, who started out on the track, and is a two-time team pursuit world champion and a silver medallist in the same event at the 2012 London Olympics, as well as having set the Hour Record in 2015.

"The innovation of working with the best possible products that are on the market and available to us, that's something I'm really passionate about, especially when it comes to time trials."

"Personally, the Olympics [time trial] is my biggest goal for 2020. I had a bit of an unfortunate event in Rio, which stopped me from medalling," Dennis said, referring to his aero bars having broken in 2016, when he went on to finish fifth following a bike-change, 1:10 down on winner Fabian Cancellara.

"I want to prove that I should have been on that podium," he said. "And not just silver or bronze; I want that gold medal. The Olympics only come every fours years, and so if something goes wrong in Tokyo, you have to wait until 2024, which is what makes it a little bit special."

Besides another tilt at Olympic gold next summer, in the months before, Dennis said that he'll be concentrating on the three individual time trials at the Giro d'Italia, which gets under way in Budapest, Hungary, on May 9, with an 8.6km prologue and finishes on May 31 in Milan with a 16.5km individual time trial. In between is a 33.7km TT on stage 14, which adds up to just under 60km against the clock at the 2020 Italian three-week race.

"In the past, the Giro wouldn't have excited me too much, but fortunately next year, and unusually for a Grand Tour, there are three time trials, which is perfect for me being a time-trial specialist," said Dennis.

"I can really go there and try to nail those, while trying to work for whoever our GC rider is as well. It's also exciting knowing that this team has such a strong line-up when it comes to GC leaders in Grand Tours, and knowing that we have a really strong chance of finishing it off and being on the podium, and a high chance of being on that top step in Milan."

In the meantime, Dennis is looking forward to getting his season under way, and getting to know his new teammates a little better.

"I'm pretty excited about getting to camp in Mallorca," he said. "From what I know, it's very crucial. It's about building that relationship as quickly as possible. We race early with the Tour Down Under, so building that close-knit group from the word go is vital to get the best possible results in January.