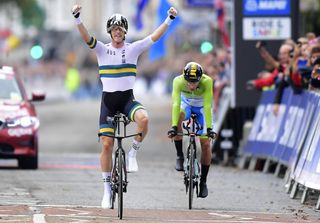 Team Ineos have emerged as the front runners to sign free agent Rohan Dennis for next season, but CCC Team have not entirely given up hope of rekindling their relationship with the Australian world time trial champion. Dennis rode for the team under the BMC Racing banner between 2014 and 2018.

Dennis saw his two-year contract at Bahrain-Merida terminated on September 13 after walking out of the Tour de France in July over disagreements with the team management. He was not selected to race for the squad in the following months but retained his time trial world title in national colours last month.

Where will Rohan Dennis end up?

Several teams have been linked with picking up Dennis for next season, with Team Ineos now the front runners to sign him. Movistar, who were also linked with the rider, have told Cyclingnews that, despite showing interest as far back as June, they have not opened negotiations with Dennis or his agent, Andrew McQuaid.

"There is a lot of interest from us and the team, but it stops there," Movistar’s Max Sciandri told Cyclingnews.

Sciandri knows Dennis from their time at BMC Racing and the former British road rider talked to Dennis about a possible switch to Movistar back in June. Earlier this month, La Gazzetta dello Sport reported that Movistar were in contention to sign Dennis.

"I had a good talk with him during Suisse and that was it. It didn’t go any further. There’s a lot of interest. I know it’s a Spanish team, but it could have been a team that developed him in different aspects in terms of Grand tours."

Sciandri and several other sources around the story have indicated that Dennis is most likely to move to Team Ineos. However, Sciandri raised a slight concern over whether Dennis would have space within the team to develop. The Australian has made no secret of his desire to focus on the Olympic Games time trial in 2020 before a possible shift towards Grand Tour development the year after.

"Going to Ineos, he’s another number with a bunch of great guys. I think he’s going there. They put a lot of money there, but it depends on what he wants and what he’s looking for - if he wants to concentrate on time trialling or if he wants to develop and look at different things," Sciandri said.

"They have Bernal, Thomas, Froome, and Carapaz. Is he the next on that list or is he going to ride at the front all day like Kwiatkowski? Is he going to try and win the Giro or the Vuelta? I don’t think so. I’ve tried to call him a couple of times but that’s about it."

Team Ineos would not confirm or deny links to signing Dennis, only stating: "We don’t comment on contract or transfer speculation."

CCC Team, who have made no secret of their desire to sign Dennis, are still holding out hope that the Australian decides to ride for them. Cyclingnews understands that the team already offered Dennis terms but they were pushed back.

Jim Ochowicz told Cyclingnews via text on Tuesday: "Nothing has changed since last week. We are still very interested in having Rohan Dennis at CCC Team and would be honoured to do so."

Trek-Segafredo, one of many teams approached by Dennis’ agent in the summer, confirmed that there had been no development on a possible move to the American squad for 2020. Trek-Segafredo have almost completed their roster for next season and would have to find additional funds in order to make any deal possible.

Dennis’ future could also be affected by his ongoing dispute with Bahrain Merida over his terminated contract. When confirming that Dennis had been fired, the team also announced that Dennis had brought the matter before the UCI’s Arbitral Board.

The UCI confirmed Dennis’ actions on Wednesday but no further development has been made. Dennis and his legal representatives have not filed anything with the UCI since then, and the governing body will not act until a claim of any kind has been made.

When asked for a comment concerning Dennis’ future, McQuaid responded: "The legal case is ongoing and until that has reached its conclusion we will not be making any comment on Rohan’s position."