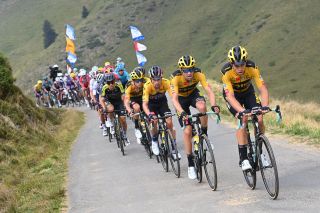 A show of strength by Jumbo-Visma on the Tour de France's first Pyrenean stage on Saturday produced decidedly mixed results after the Dutch squad eliminated some of Primož Roglič's top rivals from the running, but at the cost of a serious dent to Tom Dumoulin's GC chances.

On the plus side, Roglič remains second overall at three seconds behind maillot jaune Adam Yates (Mitchelton-Scott), perfectly poised to take a crack at the GC leadership if he stays as strong as he clearly is right now.

Meanwhile, the number of riders at a minute or less on the GC behind Yates and Roglič has shrunk from 15 to 10. An uneven performance by Egan Bernal (Ineos-Grenadiers) on the Peyresourde was another positive note for the Dutch team.

However, on the downside, Dumoulin's loss of two minutes sees him veer perilously close to a point where his GC aspirations are no longer relevant, leaving Jumbo-Visma with one of their two overall cards to play.

Roglič, who controlled the bulk of the attacks – barring UAE Team Emirates youngster Tadej Pogačar's second move – with notable ease, was his usual non-commital self at the finish, saying repeatedly that "it was a start".

"I'm not really surprised that all the favourites were still together at the finish; it's not a fight for the [stage] victory," he pointed out, "so that made it quite different. It's true there was a hard tempo, but it's the first mountain stage and there's still a lot to come.

"We always try to do the best we can with our team to get as high as possible."

Sports director Grischa Niermann was rather more forthcoming when asked if the glass was half-full or half-empty for Jumbo-Visma.

"I think in general we are one day closer to the goal, as Primož is still second at three seconds," he reflected. "Maybe it didn't work out 100 per cent how we wanted, with Tom losing some time, but in the end we are still in the place we wanted to be."

As a first test of strength, Niermann said, their main man had come up to expectations.

"Primož wanted to stay with other opponents, and if others attacked he wanted to follow," he pointed out, before conceding that Pogačar was able to gap the rest of the field.

"It's a pity that that happened, but there are harder days to come," he reasoned. Nor was 'holding the line', as Roglič had done, the worst result possible, he intimated: "We also saw Thibaut Pinot [Groupama-FDJ] lose 10 minutes and fall out of contention. There were some big explosions today."

Roglič's teammate George Bennett explained that in terms of the squad's support riders, it had not been a straightforward day, and that had had a major knock-on effect on how big a blow the team could strike.

For one thing, their climbing specialist Sepp Kuss – Roglič's lead-out man at the Orcières-Merlette summit finish, as well as on two occasions in the Critérium du Dauphiné – was dropped early on the Port de Balès. He had suffered because of doing so much work in the echelons of stage 7, Bennett explained. The Kiwi also said that he was also on the backfoot "ever since that crash in Nice".

"There are plenty more mountains  to come, and we don't need to worry about taking time every day… We showed that the team today could shake the tree," Bennett argued to ITV.

"Unfortunately, Sepp had a really big day yesterday. He paid for that today, and I haven't been good enough since the crash in Nice, and to really pull off something like that" – strike hard at their rivals – "both of us needed to be back on our level. And it might take a few more days for us to find our legs."

Bennett praised Dumoulin lavishly with regards to how the Dutchman was willing to sacrifice his own chances for the common goal – effectively showing that Roglič was now the team's only plan. Or as Bennett put it "everybody's in here for the one goal".

"He said on the race radio, 'I'm not feeling great, and I'm not here to get 10th at the Tour.' So he's put the team first,  he's committed to Primož, and that's huge credit to him."