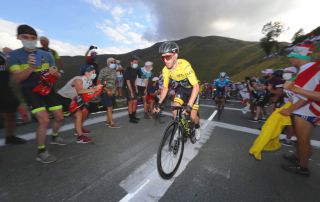 Adam Yates (Mitchelton-Scott) succeeded in holding on to his yellow jersey despite a viciously aggressive series of attacks on the Peyresourde on stage 8 of the Tour de France that almost saw the Briton in trouble before he righted the ship, kept going at his own pace and came home safely with the main favourites.

The first point when Yates looked to be struggling slightly came thanks to an initial move by Tadej Pogačar (UAE Team Emirates) saw Primož Roglič (Jumbo-Visma) rapidly bridge the gap, with Nairo Quintana (Arkéa-Samsic) on his heels.

Neither Yates, nor defending champion Egan Bernal (Ineos Grenadiers) could follow, but the leading trio then eased up, only for another move by Pogačar leaving him clear.

Lacking in teammates, Yates managed to remain in contention in the following group of favourites and the Briton chased down a move by Romain Bardet (AG2R La Mondiale) and another by Guillaume Martin (Cofidis) in the closing kilometres. But his grip on the yellow remains a slender one.

“The climb [of the Peyresourde] was pretty hard,  we’d let the break go from the beginning but Jumbo-Visma really went for it and I just had to hang on,” Yates said in his post stage press conference.

Asked about the events on the climb itself, where Jumbo-Visma’s blistering acceleration had shredded the front group, Yates said his feelings had not been great when a certain Dutch Giro d’Italia winner had begun piling things on at the front.

“I was doing ok but then Tom Dumoulin set a very fast pace. I had to pull over, ride at my own pace, come back in my own time, and then stay with them over the top.”

He was not, he said, surprised that Jumbo-Visma had laid down such a high rhythm on the front on the Peyresourde, even to the point of sacrificing Dumoulin’s own GC goals.

“Like I said yesterday, this is the first big test, the first real big mountain stage, so why not test the other riders?” he asked rhetorically. “With the pace they set, they thought they could maybe take time off people, why not do it sooner rather than later.”

Yates had survived well on the Mont Aigoual, and despite being isolated from his teammates – as he was in the closing kilometres of the stage on Saturday – got through the echelons of stage 7 with his lead intact. Although wobbling slightly in the first major Pyrenean climbs, he remains in yellow so a question as to whether he would now switch his pre-race aim from stages to the GC was all but inevitable.

“I just want to take it day by day, it’s pretty hard to throw away the lead,” Yates said,  “It’s not every day you lead the Tour de France, so I'll try and keep it for as long as possible.”

“But if that time comes and I lose the jersey, and I lose a lot more time then I'll start going for stages.”

On paper, stage 9 is marginally easier than stage 8, with a greater distance between the main challenges and ‘only’ two first category climbs, not three.  However the last segment of the final climb, the Col de Marie Blanque, is ferociously steep, and there is a fast drop to the finish at Laruns. Yates’ Pyrenean battle for yellow is far from over yet.