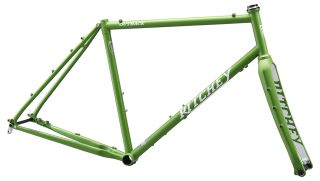 Ritchey is one of the most esteemed names when it comes to gravel bikes and the Californian brand has revealed a completely redesigned Outback frameset.

Although the frame still features that tested chromoly construction, which Tom Ritchey has always championed for off-road capable bicycles, its geometry has been thoroughly revised.

Ritchey claims that 700c tyres of 48mm width, or 650b rubber in 2-inch configuration, will comfortably roll in the rear triangle of its new Outback, even in muddy conditions.

Both the front and rear wheels are now held in place by 12mm through-axles, which yield a substantial increase in overall stiffness and steering precision, especially when the Outback in being used in its bike packing role.

Front steering is controlled by a reshaped version of Ritchey’s carbon-fibre Adventure fork, which has rack and fender mounts. At only 473g, the Outback’s Adventure fork is credibly light and interestingly retains a straight steerer, which was specified to increase compliance and dull some terrain buzz.

Ritchey has also slackened the head-angle geometry by two-degrees, slowing the bike’s responsiveness a touch, to increase overall gravel-road-handling feedback.

The largest 1x chainring size is 46T or 50/34T if you are keen on running a double upfront.

Other notable frame details with the new Outback is the revised rear brake disc mount, which has changed from post to flat, allowing for brake rotors up to 160mm. A threaded bottom bracket anchors the Outback’s crankset, which should appeal to durability minded riders who keep their gravel bikes churning through the worst winter conditions.

Ritchey claims that its size large Outback frame weighs 2,270g. There are five available sizes and they all retail for £1,299.